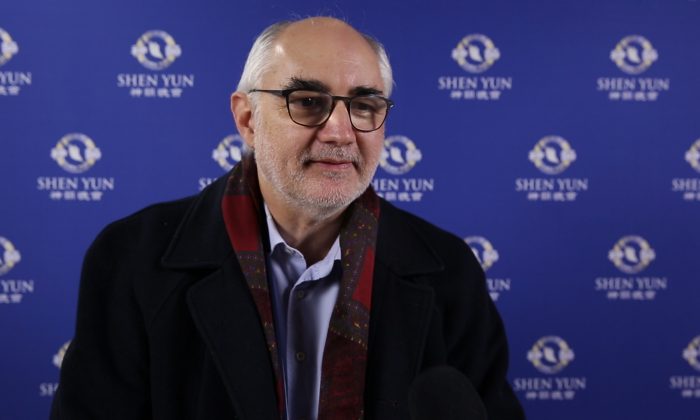 PARIS—Author and filmmaker Vincent Mirabelle stepped into the Palais des Congrès on Jan. 19 to witness the authentic traditional Chinese culture, and left happy, in a bubble of serenity.

“I think we had a bath in beauty, and then we leave with a lot of serenity,” Mirabelle said.

Moved by the incredible beauty he’d just witnessed, Mirabelle had high praise for the artists: “You invited us on a magnificent cultural-historical-artistic journey.”

What captured his attention at first, Mirabelle said, was being awash in color at the sight of the brilliant costumes which lit up the stage from the very opening scene.

“We’re really in a harmony of colors, then comes the music, magnificent, which allows us to bridge the gap between our own music and Chinese music,” he said, referencing the unique orchestra which blends East–West orchestration and Chinese instruments into a Western symphony. “And then, finally, everything starts to come alive—it’s the dance, it’s beautiful.”

And for Mirabelle, it was beauty of the highest order.

“I really believe that beauty can save the world,” he said, thanking Shen Yun for its beautiful project to revive the divinely inspired culture. Shen Yun was formed by artists from around the world with the mission to revive the once-lost 5,000 years of Chinese civilization, through the universal languages of music and dance. Mirabelle felt they were accomplishing exactly that.

“I think that this kind of show, first of all, has a very peaceful vision to help the world. It builds bridges between the West and the East, so it is a very beautiful effort of unity, and beauty is certainly what can unite us most together,” he said. “I believe that beauty saves the world.”