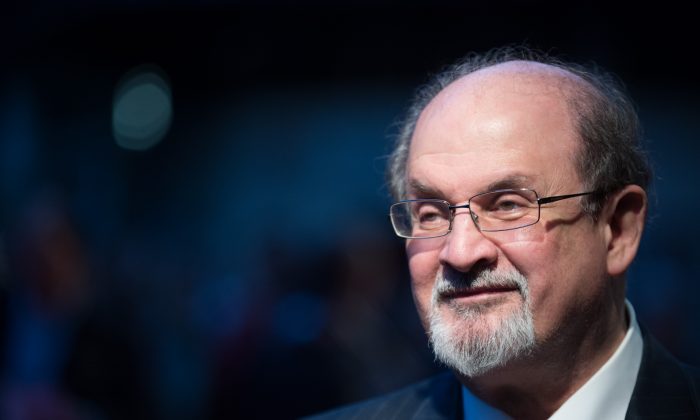 Writer Salman Rushdie in a file photo from an event in London last year. (Ben Pruchnie/Getty Images)
US News

Author Salman Rushdie, whose 1988 book led to death threats from the Iranian regime and other Islamists, was attacked during a lecture series in western New York, according to officials and witnesses.

The New York State Police confirmed Rushdie, 75, may have been stabbed. Rushdie was taken via helicopter to a nearby hospital, and information about his condition was not made available.

“On August 12, 2022, at about 11 a.m., a male suspect ran up onto the stage and attacked Rushdie and an interviewer. Rushdie suffered an apparent stab wound to the neck, and was transported by helicopter to an area hospital. His condition is not yet known,” the New York State Police wrote in a statement Friday.

New York Gov. Kathy Hochul confirmed at a news conference Rushdie and the event moderator were both attacked. Rushdie, she said, is “getting the care that he needs” although she did not elaborate on his condition. She said he was alive and a trooper “stood up and saved his life and protected him as well as the moderator who was attacked as well.”

“Thank you to the swift response” of state police and first responders “following today’s attack of author Salman Rushdie,” the governor added on Twitter. “Our thoughts are with Salman [and] his loved ones following this horrific event. I have directed State Police to further assist however needed in the investigation.”

Officials told local media that the suspect, who was not identified, was apprehended by police after the alleged attack.

People who were in the audience told news outlets that as Rushdie was about to give a lecture at the Chautauqua Institution, a man rushed onstage and attacked him.

“I was looking down at my cellphone when I heard a scream from behind me,” Daniel Stern, a witness, told the Wall Street Journal, adding that a man was making a punching motion toward Rushdie. Stern said Rushdie tried to get away, which is when Stern saw blood on the author’s face.

“The assailant jumped on him again when he stood up,” Stern said, according to the paper.

Rabbi Charles Savenor was among the hundreds of people in the audience. As people gasped, spectators were ushered out of the outdoor amphitheater, he said.

“This guy ran on to platform and started pounding on Mr. Rushdie. At first you’re like, ‘What’s going on?’ And then it became abundantly clear in a few seconds that he was being beaten,” Savenor told The Associated Press. He said the attack lasted about 20 seconds.

An AP reporter who saw the attack also said that the suspect was seen punching or stabbing Rushdie.

Author Carl LeVan wrote on Twitter that he saw the attack: “Just witnessed the assassination attempt on Salman Rushdie’s life. Still in shock. Unsure of his condition. We are being evacuated.”

He added: “Just witnessed the horrific assassination attempt on #SalmanRushdie’s life. He was stabbed multiple times before attacker was subdued by security. Some intrepid members of audience went on stage. What courage will be expected of us next to defend even the smallest freedoms?”

Another apparent witness, Carter Byham, wrote on the website: “SALMAN RUSHDIE. WAS JUST ATTACKED BY KNIFE 10 yards away from me. Perp subdued. RUSHDIE BLEEDING HEAVLY. RUSHED TO HOSPITAL.”

Born in India in 1947, Rushdie’s 1988 book “The Satanic Verses” was deemed blasphemous by some Muslims. Often-violent protests against Rushdie erupted around the world, including a riot that killed 12 people in Mumbai.

The novel was banned in Iran, where former Supreme Leader Ayatollah Khomeini issued a 1989 fatwa calling for Rushdie’s death. A bounty of over $3 million has also been offered for anyone who kills Rushdie by the Iranian regime.

In another high-profile attack in western New York, Rep. Lee Zeldin (R-N.Y.), was attacked by a man several weeks ago who was holding what appeared to be a bladed weapon. Zeldin, a Republican candidate for governor, was giving a stump speech when a man attempted to attack the lawmaker with a sharp object.

According to footage of the attack, suspect David Jakubonis raised his arm toward Zeldin as he held a keychain with two sharp points. The congressman from Long Island then grabbed Jakubonis’ wrist and the two tussled to the ground as others jumped in to help.