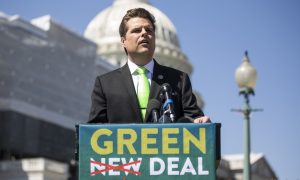 A projected elephant, the logo of the Republican party, is seen in a Dec. 15, 2018 file photo. (L.E. Baskow/AFP/Getty Images)
Politics

Author Reflects on How Republican Party is Misrepresented

California has voted Democrat for the past seven presidential elections. Now, with only nine remaining Republican members in the California congressional delegation since the 2018 midterm election, some Republicans in California have expressed that they are being misrepresented and misunderstood.

As the 2020 election discussions continue and more Democratic candidates pull out of the race for the presidential seat, some California Republicans are raising the question of whether and how the Republican Party can regain a presence in the current deep-blue state of California.

The Epoch Times reached out to Karen Watson, an author who is the founder and president of GOPBuzz.com, for insight into the significance of being an African-American Republican and the relationship between the Republican Party and California.

Watson explained that her reason for choosing the Republican Party lies with the policies and ideas of the party. When she was in high school, Watson had an opportunity to attend the 1984 Republican National Convention in Dallas, Texas.

“I went to the convention in Dallas, and I had the chance to meet Ronald Reagan at the convention. It was very inspiring,” she said.

During the 1984 U.S. presidential election, Reagan won 49 of the 50 states, which Watson described as a truly memorable moment. Watson said that feeling of togetherness is missing from the current state of politics.

When she spoke about the reason for today’s deep political division and the Democratic Party’s current attempt to rewrite and reconstruct U.S. history, she said part of the problem is that people don’t know or were not taught the history of the United States. She said that people often make assumptions that should not be made.

“The history [of the United States] doesn’t have a party,” Watson said.

She believes that many groups of people are currently politicizing history and attempting to frame conservative and traditional values as bad or backwards, when that is not necessarily the case.

She gave the example of female abolitionists who took part in the movement to end slavery. Watson said that the histories and images of some of the women have been “turned into a very unaligned narrative that goes against history.”

“When [history] is used to divide instead of unite, I think that’s really sad; it’s just like people don’t know the true history,” she said.

Watson said that learning history and showing how politics affect people locally are important in letting people know about the Republican Party to allow them to make their own educated decisions regarding politics.

Ever since President Donald Trump took office, many liberal organizations and people have labeled the Republican Party and President Trump as “racist.”

Watson said of this: “There are those who have different views and see people differently because of the system. It’s just a sad, evil state for people.”

She said that issues of racism and labeling exist regardless of political party affiliation and are based on an individual person’s morals and perspectives. It’s a result of the larger institutional systems that exist in society, she believes.

“The majority of that narrative that is negative is not attributed to any one party,” said Watson.

As for Trump, she says he is doing a “wonderful” job as president, and she believes the “racist” label that people have attributed to the president is not true.

“I think it’s an easy term to throw when you don’t want to talk about the issues, because it’s a blanket term to use to not focus on real issues at hand,” Watson said.

Politics Then and Now

With self-identifying democratic socialists such as Rep. Alexandria Ocasio-Cortez (D-NY) and Rep. Rashida Tlaib (D-MI) currently in office and Sen. Bernie Sanders (I-VT) running in the 2020 presidential election, the idea of “socialism” is slowly rising in popularity in the United States, a country that has always stood against socialism and communism.

Watson said that the rise of socialism and making fallible promises is “very scary.” With her background in and studies of history, she has found that socialism has never worked out well in any country.

She explained that this current culture of entitlement is not sustainable. The culture of the United States is moving away from the idea of “service to your country,” which was what politics was about during the time of President John F. Kennedy.

She thinks the question people should be asking is what they can do for the country, rather than what the country can offer or give to them.

“Hopefully people will wake up before it’s too late and … stop that madness, because [socialism] just don’t work,” Watson said.

Watson emphasized that it is important for people to learn and understand history in order to make decisions regarding the future of our country and for people to understand what the RepublicanParty is about.