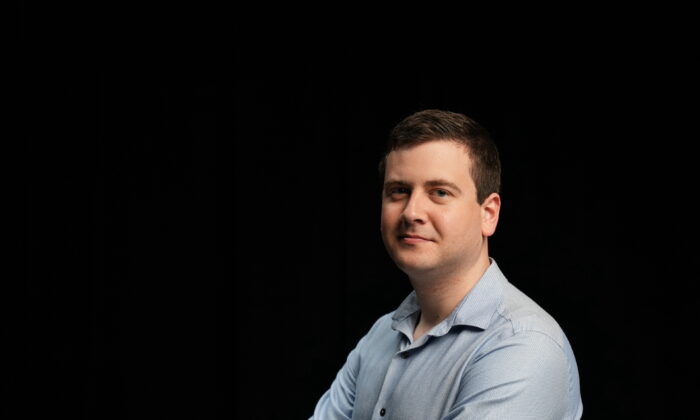 Matt Palumbo, author of “The Man Behind the Curtain: Inside the Secret Network of George Soros,” during an interview on "Facts Matter" on June 15, 2022.
Defending America

Matt Palumbo, author of “The Man Behind the Curtain: Inside the Secret Network of George Soros,” details billionaire George Soros’s connection to American politics, and illustrates how Soros controls not only what is written about him, but also influences how the American public perceives news events.

Soros created a financial concept called reflexivity, which Palumbo said is “brilliant,” because it can cause what Soros wants in the finance sector to happen.

“But expectations set reality and Soros realized, ‘Well, that’s true of media as well.’ If you tell people what to expect, they’re going to reinterpret reality,” and that can be used to affect how people interpret news events, Palumbo said during a recent interview for EpochTV’s “Facts Matter” program.

How Soros Spent $18B to Control the Media, Defund the Police, and Elect Liberal Prosecutors

“For whatever reason, if people think something’s going to happen, it actually will happen,” and Soros applied this to media companies’ coverage to make people believe something that did not actually happen, happened, said Palumbo.

Soros-backed media agencies use this concept to create false narratives and make people believe in something that did not actually occur. The reason Soros is able to have this level of influence is that he gives tens of millions of dollars to the U.S. media infrastructure.

There are many Soros-linked mainstream media organizations including, “ABC, CBS, CNN, Washington Post, New York Times, I mean, it is a very long list. Type Soros’s name and just look at how they cover him, and if it’s ever anything negative, it’s ‘anti-Semites say: negative claim,’” said Palumbo, adding that their coverage always seems to favor Democrats and Soros.

A watchdog group called the Media Research Center (MRC) has documented Soros’s ties to media infrastructure. “Soros has spent more than $52 million funding media properties, including the infrastructure of news—journalism schools, investigative journalism, and even industry organizations,” according to an MRC report.

Many left-wing groups, including media companies, get funding via Soros’s Open Society Foundation. That group is known to fund progressive initiatives like Black Lives Matter and Defund the Police, as well as political candidates and district attorney campaigns, said Palumbo.

Soros’s foundation claims to promote democracy and individualism, but in reality, it supports a more radical agenda, said Palumbo.

“There is what they say things are and what they really are,” Palumbo said about the Open Society Foundation

Alexander Soros, George Soros’s son, heads the Open Society Foundation, which in 2017 was given $18 billion by George Soros to fund progressive causes. They have chapters all over the world, including an office in New York.

Palumbo cites Soros’s disguising himself as a Christian during his early years in Hungary before the rise of Hitler, when Jews were being purged, to explain the possible reason for Soros’s support of leftist ideology.

Before the rise of Hitler, Soros was taken in by a Christian man, who swore to authorities that Soros was his godson. Soros worked with the man to confiscate Jews’ property.

In a 1998 interview with “60 Minutes,” host Steve Croft asked Soros if he felt any guilt about confiscating property from Hungarian Jews, to which he replied that he did not.

“I was 14 years old, and I would say that that’s when my character was made. … That one should think ahead, one should understand and anticipate events, and when one is threatened, it was a tremendous threat of evil, I mean, it was a very personal experience of evil,” Soros said.

When questioned further about whether it was difficult knowing fellow Hungarians were being sent to death camps after he helped take away their property, Soros said it was not difficult in any way.

“Not at all, not at all. Maybe as a child, you don’t see the connection. But it created no, no problem at all,” said Soros. “I was only a spectator. The property was being taken away. So, I had no role in taking away that property. So I had no sense of guilt.”

In his research, Palumbo also found that many people who once worked for Soros’s Open Society Foundation later went on to work for media outlets.

In addition, Soros has funded campaigns for many Democratic politicians and progressive district attorneys, backing those who will get the results Soros wants.

“If you elect a DA, they have total autonomy on all those things, so it’s just hey, I want the law changed, I back a guy who wants to change it exactly the way I do, he goes in and changes it overnight,” said Palumbo

“But when you’re in a DA’s race, and there’s a couple of hundred grand spent with each person normally and then you drop 1 or 2 million,  you actually can buy an election that way. And it’s happened time and time again. There in fact are cases where the challenger just drops out, because they know there’s no point,” said Palumbo.

The reason a broader swath of the public does not know who Soros really is is that he controls these organizations with money.

“It’s sort of an implied contract, where, ‘I’ve gotten money from this guy before, am I really going to badmouth them in my report?’ And a lot of people just choose not to,” Palumbo said.