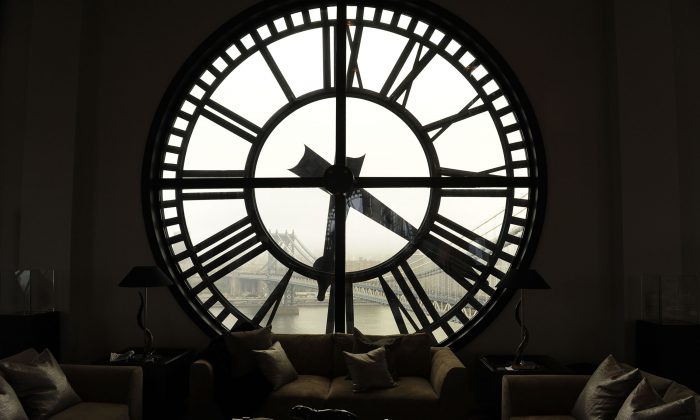 Atmosphere at the 9th Annual Esquire Apartment - The ClockTower in Dumbo on October 13, 2011 in New York City. (Photo by Eugene Gologursky/Getty Images for Esquire)
US

Sunday is Nov. 1, which means at 2:00 a.m. sharp people across the nation (except Arizona and Hawaii) should be setting their clocks back one hour to return to standard time after saving daylight for the past eight months. Even if your smartphone reverses time for you, you’ll wake up relishing the brighter morning and the extra hour of sleep.

The idea of an hour gained in November and an hour lost in March are most people’s associations with Daylight Saving Time (DST) these days, but the original idea was justified based on the concept of saving energy.

Michael Downing tells a lively history of the seasonal clock change in “Spring Forward: The Annual Madness of Daylight Saving.” He believes that since 1919, DST in the United States has been one big energy savings hoax that only fuels the greed of commerce.

In the early days, sellers welcomed the extra hour of sunlight as it encouraged shoppers to meander a little longer and make additional purchases. Thanks to retailers in New York City, who drove the continued use of the unpopular experiment in 1919, DST has stood the test of time across the nation.

In a telephone interview, Downing who calls this seasonal exercise “a cynical substitute for real energy policy,” recounted how DST was originally a scheme temporarily employed during World War I and World War II to save millions of dollars in energy costs. The idea was that an extra hour of sunlight in the evening would reduce the use of electricity and save fuel because people could use natural light to see.

The newly elected president of the American Association for the Advancement of Science “unscientifically” declared in 1917, according to an excerpt of Downing’s book, that the country could save $25 million in energy costs. Downing counters that energy consumption is variable from year to year, fluctuating with unpredictable weather, so fuel savings would have been pretty difficult to calculate.

Starting with World War I, the temporary measure was enacted for seven months in 1918 and 1919. After the war ended, the law proved to be so unpopular that it was repealed in 1919 since supporters of the tactic couldn’t prove that time-switching really did save energy.

At that time, people rose earlier and went to bed earlier compared to people today, so it didn’t really matter to them. But it made quite the difference to retailers, who benefited from extra daylight consumer spending time.

New York retailers profited so much that they got a representative, Colgate magnate Sidney Colgate, to heavily lobby Congress to keep the measure. But when asked whether or not DST saved coal, Colgate couldn’t honestly say it did, according to an article Downing wrote in 2005. Nonetheless, New York City enacted a local law to keep DST, and other cities such as Chicago and Philadelphia followed suit.

President Franklin Roosevelt reinstituted DST during World War II from 1942 to 1945, but it wasn’t a federal law—states were free to observe it or not. The conglomeration of time changes from state to state caused a lot of confusion and led to the Uniform Time Act in 1966, which standardized the start and end dates for DST, for states that chose to do it.

Downing finds it quite amusing that Congress has said since 1975 we are saving 100,000 barrels of oil with every additional day of daylight saving. This idea was initiated during the oil crisis in 1973 when President Richard Nixon passed the Emergency Daylight Saving Time Energy Conservation Act to institute DST year round.

Baby boomers may remember the long gas lines and the upward spiral of fuel prices. The price of oil per barrel doubled then quadrupled.

Nixon said in a statement on signing the act that the conservation during the winter months would save an estimated 150,000 barrels of oil per day. As an extra incentive to sell the American people on the idea, he added that unlike many other initiatives to deal with the crisis, “these savings will not require research, new technology, diplomacy, or exploration.”

A 1975 Department of Transportation report estimated DST could reduce electricity consumption by 1 percent per day, said Downing, but we’ve never come close to achieving these energy savings, he added.

In 2005 when the Energy Policy Act was passed, seven months of DST was extended to eight, but this was not driven by energy savings, according to Downing who points out that there was no conservation measures except for DST. He credits the change to lobbying by the National Association of Convenience Stores (NACS), where 80 percent of gasoline is sold. According to the NACS, in the 1980s and 1990s it helped move up DST, estimating it would add $1 billion of sales per year to the industry.

Downing said the DOE continued to assert the energy savings of DST for years, until around 2007 when they finally admitted that it’s just a practice that’s good for social policy because it pushes people to go outside for recreation and encourages healthy habits—and spending money, apparently.