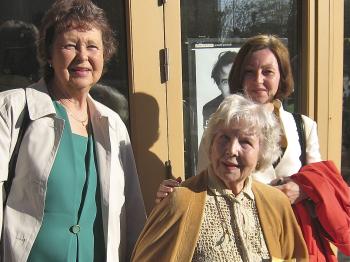 Author and Artist Says Shen Yun is a ‘Must See’

STOCKHOLM—Shen Yun Performing Arts Touring Company was greeted by warm applause in Stockholm on Monday, April 25. Both friends and families had come to Cirkus to experience a rare glimpse of the 5,000-year-old Chinese culture and history.

Author and artist Ms. Inger Possenius Bichara looked happy and much younger than her 93 years when outside the Cirkus in the sun after the show.

In 2009, Ms. Bichara wrote a book about her fascinating life in Egypt, where she lived for 20 years from the early 1950s. She was married to an Egyptian senator and lived next door to former president Nasser. During these years she witnessed historical events and great changes in the country.

Ms. Bichara is also a painter and has held several exhibitions and earned media attention. She paints botanical collages and draws on her imagination and nature for inspiration. As a visual artist, she especially appreciated the Shen Yun costumes, which feature handmade and richly decorated garments.

There are hundreds of handmade costumes in the show with brilliant colors.

“It is incredibly beautiful, not just the dancing, but the exquisite costumes. Such quality and beauty, it really enhanced the experience of the dance for me. This lovely, thick silk. You rarely see that nowadays,” Ms. Bichara said.

“China has always been the silk country, and I think it's nice that this comes across in the show,” she added.

Ms. Bichara came to Cirkus with her friend, Ms. Solveig Eriksson, who has worked as a public servant for 35 years. Ms. Eriksson, who is a fan of music and sings in a choir, also brought her daughter.

“It was a really lovely show. Very nice to see something from another country, which was so soft and calm. Although there is a lot of action all the time, it's somehow relaxing,” Ms. Eriksson said.

The Shen Yun Touring Company Orchestra is a unique blend of classical Western and traditional Chinese instruments, and the music of the show appealed to Ms. Eriksson.

“The soloists were very good, and the orchestra had a lovely sound,” she said, and added that the erhu virtuoso, Qi Xiaochun, especially appealed to her.

Ms. Eriksson's daughter, Tina Eriksson, is a project coordinator at a company in Stockholm. Shen Yun awakened a genuine interest in Chinese culture in her.

“I have to go home and read up on Chinese history. I realized how little I know about it," she said.

“I would recommend it to anyone I meet. I think it is a must see,” she concluded.

Ms. Tina Eriksson has lived in Vienna and is going to recommend the show to her friends there.

“I heard the show was coming to Vienna, so I'm going to text my friend, I think she would appreciate it,” she said.