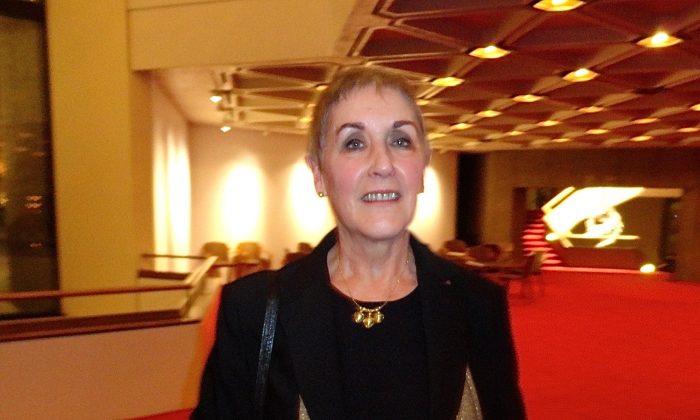 Art history professor and author Maureen Korp has seen Shen Yun Performing Arts every time it has come to Ottawa and said she finds something new to appreciate every time. Jan. 2, 2014. (Madalina Hubert/Epoch Times)

OTTAWA, Canada—Canada’s capital city was bitterly cold on Thursday night, but the National Arts Centre was filled with warm applause by the full house throughout the Shen Yun Performing Arts opening night performance.

Author and art history professor Maureen Korp comes to see the renowned classical Chinese dance and music production every year that it performs in Ottawa, and she finds something new each time.

She said there are certain things she looks forward to in the performance—precise choreography, colourful costumes, and beautiful dance—but there is always something unexpected.

“I am always delighted to be surprised by stuff I have not thought about,” she said.

This time around, one of those surprises was the story-based dance Ne Zha Churns The Sea. In the story, a local lady gives birth to Ne Zha, a mythical demi-god who is born first as a giant meatball.

“The meatball, it was first-rate,” said Ms. Korp.

She said she’s heard stories about children who save their people, but this one, in which the meatball grows into a mischievous boy who battles a dragon king, was unique.

“The idea that it starts with a meatball just amused me to no end,” Ms. Korp said.

“What I particularly liked, besides the storyline, was the technical interweaving of the backdrop with the dancing. I really appreciated that,” she said.

New York-based Shen Yun’s vividly animated digital backdrop is integral to each piece and interacts with the dancers, bringing the audience to a world where heaven and earth meet.

“The dragon just came out of nowhere. I was waiting for it to come back and it did,” Ms. Korp said.

She said she was also taken with the combination of dance and musicianship in the opening piece.

“I particularly liked the use of the drums, that whole drum sequence,” she said.

“I really enjoyed the visual and the rhythm itself. And the singing—it was utterly visceral.”

This year, Shen Yun sent its World Company—one of four companies it has touring the globe—to Ottawa. This company features three vocal soloists and an erhu virtuoso.

Ms. Korp said Shen Yun brings the themes of tolerance and compassion to the people who see the show.

An Ottawa-based scholar, curator, and writer, Ms. Korp has published over 70 articles, three books, and has contributed to CBC radio and film documentaries.

She specializes in the interrelationship of art and religion, and has taught undergraduate and graduate courses in Canada, Europe, South Asia, and North America.