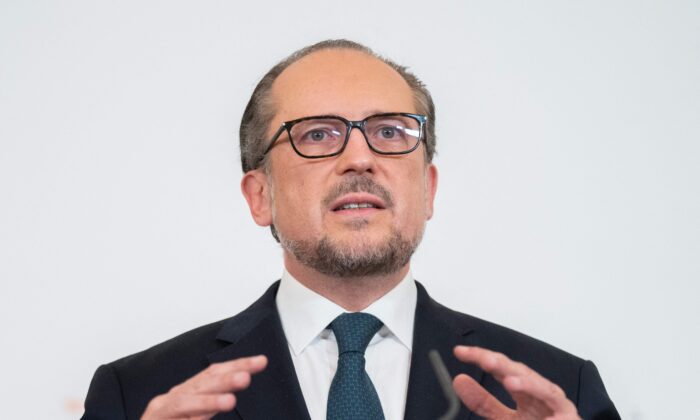 Austrian Chancellor Alexander Schallenberg (OeVP) speaks during a press conference after a Corona crisis' summit with the government and provincial governors in Vienna, Austria, on Nov. 14, 2021. (Georg Hochmuth/APA/AFP via Getty Images)
WORLD

Austrian Chancellor Alexander Schallenberg on Friday announced the country is enforcing a nationwide lockdown and also plans to require COVID-19 vaccinations for its entire population as of February.

“We have not succeeded in convincing enough people to get vaccinated,” Schallenberg said during a news conference, adding that the blanket requirement to get vaccinated against the CCP (Chinese Communist Party) virus will start on Feb. 1.

“It hurts that such measures still have to be taken,” he said. Schallenberg noted that the lockdown will start on Nov. 22 and will last up to 20 days.

Under the new measure, non-essential shops will be closed and Austrians will be asked to work from home. Schools will remain open for those who need to go, but parents are encouraged to keep their children at home.

Austria has become the first country in the European Union to impose a full lockdown this winter.

Last week, officials initially placed millions of people who aren’t fully vaccinated on lockdown, a measure that has now increased to the whole population regardless of vaccination status.

Schallenberg said the lockdown and vaccination requirement is needed to avoid a “fifth wave,” referring to an increase of cases in the past week. The country has reported more than 10,000 new infection cases daily, a new record.

“We do not want a fifth wave,” he said, public broadcaster ORF reported. “[Nor] do we want a sixth or seventh wave.”

The chancellor has previously alleged that the country’s COVID-19 vaccination rate is “shamefully low.” According to government data, about 65 percent of the Central European nation’s population is vaccinated.

Previously, Schallenberg said the general consensus in Austria was that officials wouldn’t make vaccinations against the CCP virus mandatory. But Schallenberg reversed course and said the consensus had been there for too long.

Schallenberg blamed the increase in CCP virus cases on the unvaccinated for refusing to get the jab, calling it “an attack on the health system.”

“Whipped up by radical anti-vaxxers, by fake news, too many among us didn’t get vaccinated,” the chancellor claimed during a press briefing, Sky News reported. “The results are overcrowded intensive care units and enormous suffering.”

The chancellor noted that the details still have to be finalized in the coming weeks, but those who continue to refuse to get vaccinated against COVID-19 would be faced with fines.

A large percentage of the public in Austria is skeptical about COVID-19 vaccines. The country has one of the lowest vaccination rates in Western Europe.

Demonstrations are expected in response to the new national lockdown and government plan to make vaccinations a requirement. The Freedom Party, the third biggest in parliament, said it is planning a protest against the restrictions on Saturday.