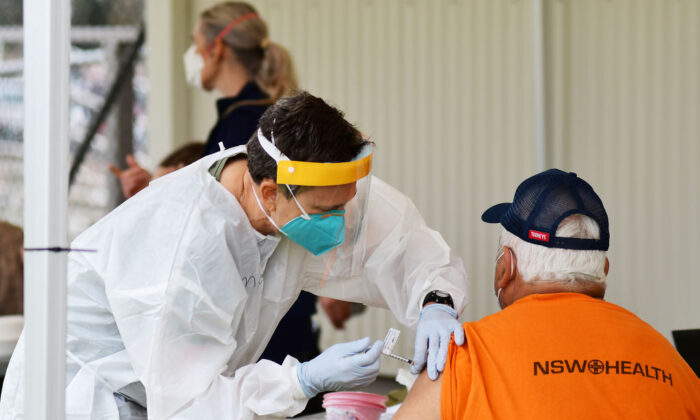 A man receives a dose of a COVID-19 vaccine at a newly opened vaccination hub in Dubbo, NSW, Australia, on Aug. 21, 2021. (Belinda Soole/Getty Images)
Australia

Australia has reached a new milestone in its vaccination campaign with 95 percent of the population now having taken the first dose of the COVID-19 vaccine.

Greg Hunt, the federal health minister, said the nation was right at the front of the highest global vaccination rate, noting that 95 percent of Australians who are 12 years old and above have received at least one dose of vaccine as of Feb. 5.

“Very significantly, over the course of today we will also pass one million children between five and 11 years of age having had a vaccination,” he said.

The Australian health minister said thank you to the people for getting the vaccine and mentioned that the federal government was seeing intensitive care units being subject to less pressure.

Meanwhile, a crowd of thousands of people protesting against vaccine mandates in Canberra on Feb. 5 was flanked by police.

The group of protesters marched from Glebe Park, located in Canberra’s CBD, to Old Parliament House, and then moved to the Federation Mall.

An ACT police spokesman said that most of the protesters had left by mid-afternoon of Feb. 5, but a few people still remained.

The ACT police and the federal police took action to disperse demonstrators whom they accused of illegally camping and parking cars on Patrick White Lawns near the National Library.

Meanwhile, the Northern Territory government lifted an outdoor mask mandate from 6 p.m. on Feb. 5. It made the decision with consideration that the territory’s residents displayed high levels of personal responsibility via mask-wearing.

However, the NT government is still maintaining an indoor mask mandate policy and urging people over 12 years old to wear a mask outside if they cannot physically distance themselves from other people.