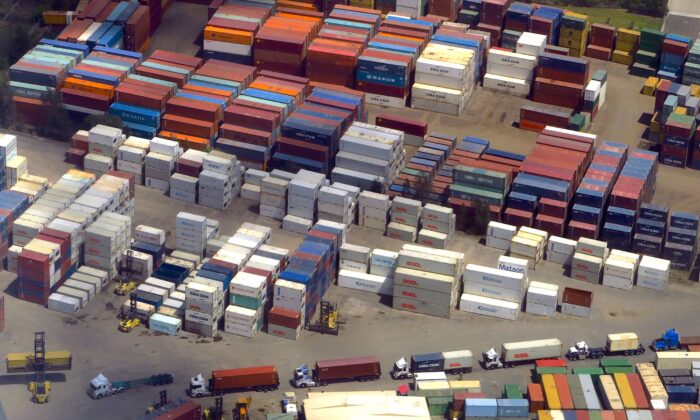 A forklift unloads shipping containers from trucks at a storage facility located near Sydney Airport in Australia on Nov. 30, 2017. (David Gray/Reuters)
Economy

SYDNEY—Australia’s trade surplus unexpectedly grew to a record in August as strength in liquefied natural gas and coal exports more than offset a pullback in iron ore prices, a windfall to mining profits and tax receipts.

Figures from the Australian Bureau of Statistics out on Tuesday showed the surplus on international trade jumped to A$15.1 billion ($11.0 billion) in August, from A$12.7 billion the month before. That was the highest on record and confounded analysts’ forecasts of a drop to A$10.3 billion.

Exports climbed 4.1 percent in the month to A$48.5 billion led by LNG, hard coking coal, and thermal coal, courtesy of strong energy demand in Asia. Both prices and volumes were higher, eclipsing a sharp fall in prices for iron ore, Australia’s number one export earner.

Demand for energy in Asia has only got hotter as shortages of electricity in China led to blackouts and countries compete for LNG and coal shipments ahead of winter.

Australian goods exports to China alone stood at A$18.6 billion in August, up 55 percent on a year earlier and showing little impact from ongoing trade and political tensions with Beijing.

Imports fell 1.5 percent in August to A$33.4 billion, with the drop mainly in capital goods while consumption good imports were led higher by cars.

Trade in services remains around half of pre-pandemic levels with Australia’s international borders still shut to tourists and students.

The ABS said that due to problems with sourcing reliable data on services it would stop reporting the figures from January, while seeking means to improve the statistics.