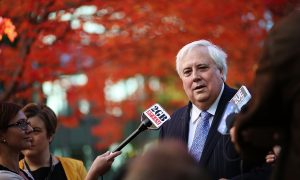 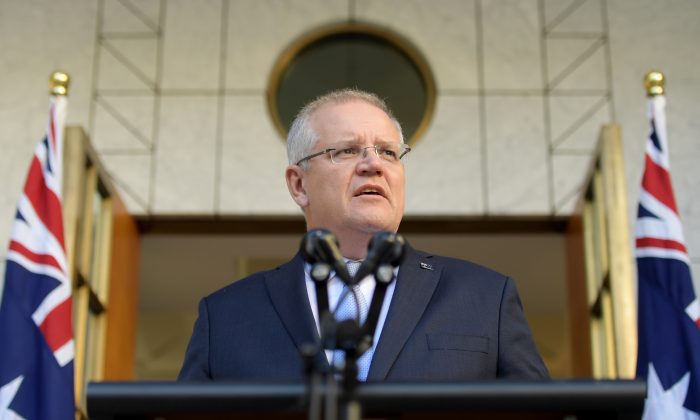 Australian Prime Minister Scott Morrison talks to the media at a press conference announcing his new Cabinet at Parliament House on May 26, 2019 in Canberra, Australia. (Tracey Nearmy/Getty Images)
Australia

Scott Morrison has promised to govern with humility and compassion as coalition MPs and senators came together for their first post-election meeting.

The prime minister welcomed 28 new Liberal and National colleagues to Canberra on May 28.

Morrison insisted his “hungry, committed and united” team would focus on the aspirations of ordinary Australians during their third term in power.

“They are the reason we have the opportunity and the great privilege to serve them each and every day,” he told colleagues at Parliament House.

“As I said just before the election, we must burn for the Australian people every single day that we have this privilege of serving them, in this party room and as a government.”

The 46th parliament is expected to open in the first week of July.

While the party room did not specifically discuss policy, the prime minister promised to do the little things well over the next three years and focus on maintaining a strong economy.

He also urged his colleagues to keep reaching into Labor-held seats, noting his was the first minority government since 1943 to be returned with a majority.

About two-thirds of the coalition party room has never served in opposition, and Morrison said they should wish never to do so because it was “a wasteland in which to work.”

While the prime minister was greeted like a rock star, his deputy Michael McCormack was bracing for a pricklier reception when the Nationals met separately.

Some Nationals are miffed the party failed to pick up an extra portfolio in a ministerial reshuffle and demanded an explanation as to why the agriculture and water resources roles were split.

There were expectations the Nationals could receive an extra portfolio such as trade, but its number of cabinet spots slipped from five to four after the Liberals boosted their numbers in parliament.

“Well, there’s always people that are winners and losers and I’m sure for each of them there’s disappointment, and joy for others,” Nationals backbencher Keith Pitt told reporters.

McCormack shot down disgruntled colleagues, saying the ministry’s composition was a simple matter of arithmetic.

The new ministry will be sworn in on Wednesday before cabinet meets for the first time, with several changes to Morrison’s line up.

The prime minister warned them all on Tuesday that there was a wealth of talent within the government’s ranks that would keep the pressure on all the frontbench to perform.

And he told his backbench colleagues he and his office would be accessible to them and he expected the same from his ministers.

“The blue carpet (parliament’s ministerial wing) should be no stranger to the green (House) and red (Senate) carpet,” Morrison said.

“It should be where the whole of the government comes together because that accessibility to the government leadership allows us to fix problems, know what the electorate really thinks and keep in touch with delivering what everyday Australians want.”

By Daniel McCulloch and Katina Curtis