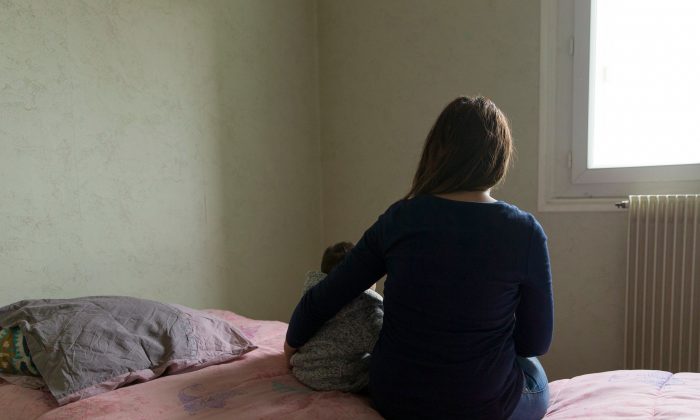 A mother and her child pose in a room in a temporary apartment of the Home association in Paris on November 22, 2016. (GEOFFROY VAN DER HASSELT/AFP/Getty Images)
Australia

The Northern Territory (NT) government will spend $7.5 million (US$5.4 million) over five years on a new accommodation centre in Palmerston, about 20km from Darwin, which will provide critical support to women and children fleeing domestic violence.

In a media release on Thursday, Minister for Families and Urban Housing Kate Worden said the government funding would ensure the facility can provide 24-hour support to up to 49 women and children at any one time.

“As a Government, we acknowledge and understand that fleeing your home can lead to homelessness and housing vulnerability. This is why we are funding a new crisis accommodation centre that provides a home and a safe place from which to move your life forward.  Crisis accommodation needs to be the springboard that allows women to regain control of their lives and rebuild,” she said.

With construction set to be completed in 2023, the facility will provide semi-independent crisis accommodation, as well as longer-term housing for female and child victims of domestic violence.

Worden said the Labor government has made tackling domestic violence one of their top priorities and that the funding is part of an overall  Northern Territory Domestic Family and Sexual Violence Framework 2018-2028, a 10-year strategy to reduce domestic, family, and sexual violence.

According to the framework document, the NT has the highest rate of domestic, family, and sexual violence in Australia, with police officers and emergency personnel attending to more than 61 incidents on a typical day.

In addition, at least one child is subjected to domestic violence every day of the year in the Territory.

The Palmerston facility will assist women and children in re-establishing their independence, facilitate trauma recovery and provide access to training, parenting and employment opportunities. It will also foster a learning and supportive environment for their children.

The Australian Government, along with the Salvation Army, are also contributing a joint $5.9 million (US$4.9 million) to the construction of the facility.

“We are encouraged by the government’s clear commitment, ensuring the availability of operational funding for crisis and longer-term accommodation by enabling us to expand our capacity to respond to women and children impacted by family violence in the NT by providing funding to support an additional 49 beds,” she said.

The news of the centre comes after both the Morrison government and the opposition announced they would create a Commissioner to oversee the prevention of domestic violence against women and children.

Under the government’s plan, the Minister for Women will spend $22.4 million (US$16.1 million) over the next five years on a commissioner to look at domestic, family and sexual violence under the next national plan to protect women and children.

“The next national plan will be an ambitious blueprint to end violence against women and children, but it must be more than words,” Minister for Women Marise Payne said on Nov. 24.

“The new Domestic, Family and Sexual Violence Commission will have responsibility for monitoring and reporting on accountability and evaluation frameworks against the next National Plan to ensure it delivers real and tangible actions that prevent violence, intervene early and better supports victim-survivors.”

Meanwhile, under Labor’s plan, the commissioner would report yearly on progress under successive national plans to stop the violence. They would also be able to lift profiles on violence reports.