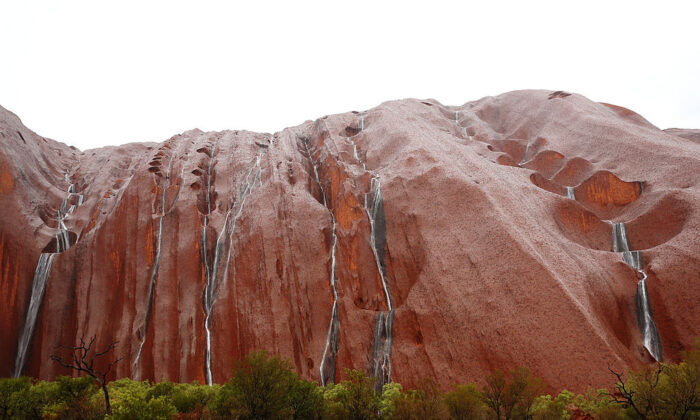 A general view of Uluru is seen as it rains on November 28, 2013 in Uluru-Kata Tjuta National Park, Australia. (Photo by Mark Kolbe/Getty Images)
Australia

Australia’s Northern Territory Government has overturned a previous decision restricting travellers to the Territory to high-vaccination zones for the first 14 days of their stay from Dec.20.

“We have listened and responded,” she said.

“These are modest changes, but they will make a big difference to bring families together, keep businesses open, keep people in work—all while still keeping the Territory safe.”

This comes after last week’s announcement that under the “strengthened roadmap” set to take effect on Dec. 20, vaccinated arrivals to the NT would no longer have to undertake a quarantine period but would be required to remain in a high-vaccination zone for the first 14 days of their visit.

This measure was expected to reduce the risk of spreading COVID-19 to remote and vulnerable communities, but according to Tourism Central Australia CEO Danial Rochford, the policy was “tantamount to throwing the industry under a bus.”

“No one will be coming to the Territory,” Rochford told The Epoch Times.

That restriction would have meant that visitors to the Territory would need to stay for two weeks in an area with high vaccination rates, Darwin, for example, rather than going directly to a place such as Uluru, Kings Canyon, or Kakadu.

However, the new changes mean that travellers will now be able to immediately visit locations where the full vaccination rate is higher than 80 percent, which includes key tourist destinations such as those mentioned above.

Chief Minister Michael Gunner said that interstate travellers would be able to access communities that are not deemed “more vulnerable”, provided they meet the testing requirements.

“So if you’re coming to the Territory, or coming home after a break:
You can go to Uluru; you can go to Kakadu, you can go to Litchfield. You can get about the Territory,” he said.
“As long as you are fully vaccinated, and you get the COVID tests that you need to get.”
There are still three PCR tests required when travelling to the Territory, the first a negative result within 72 hours prior to entering the Territory, the second a negative result within the first three days of the trip, and the third on day six.
There are currently 66 communities that are deemed “more vulnerable” because they have not yet reached an 80 percent full vaccination rate, and these locations will be off-limits to travellers for the first 14 days of their trip.