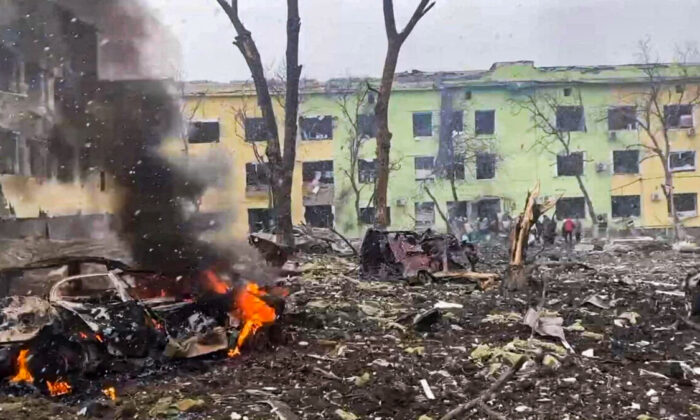 Cars and a building of a hospital destroyed by an aviation strike amid Russia's invasion of Ukraine, in Mariupol, Ukraine, in this handout picture released on March 9, 2022. (Press service of the National Police of Ukraine/Handout via Reuters)
Australia

Australia’s National Press Club has withdrawn an invitation to the Russian ambassador to speak in response to alleged war crimes and the bombing of civilian targets in Ukraine.

The Press Club, the country’s leading journalist association which regularly engages political, business, and social leaders to speak, said it was withdrawing an invitation sent weeks prior to the Russian Ambassador Alexey Pavlovsky.

“The invitations were issued at a different stage in the conflict in Ukraine before allegations of war crimes and bombing of civilian targets and the Board now considers it inappropriate to continue with the invitation to the Russian ambassador,” according to a statement from Press Club President Maurice Reilly.

He said the organisation would continue encouraging free speech and promote “balanced national discussion” on major issues of the day while reserving the right to extend an invitation for a later date.

“The National Press Club is a vigorous champion of media freedom and strongly condemns the media censorship in Russia,” he added. “Under new laws in Russia, both local and international journalists face charges of high treason and 15–20-year jail terms for reporting the facts. This situation should not be tolerated and has no place in a democratic society.”

Press Club board member David Crowe said the “invasion and its atrocities change everything.”

“He can call a press conference at any time. But a national platform for a 30-minute speech? No,” he said on Twitter.

A separate invitation to Ukrainian Chargé d`Affaires Volodymyr Shalkivskyi was sent around the same time and was honoured with the representative making his address on March 10.

Shalkivskyi has called for the Russian ambassador to be expelled.

“I’m a diplomat. I have to play along with my diplomatic narratives,” he told reporters at the Press Club.

“But when you have more than 50 children killed in your country due to the shelling, yes, I’d like the Russian ambassador to be expelled.”

The diplomat also wanted Australia to boycott all Russian supplies, goods, and services and counter propaganda.

“The Australian government is placing new sanctions on Moscow’s propagandists and purveyors of disinformation, who are trying to legitimatise Russia’s unprovoked, unjustified invasion with false narratives such as the “de-Nazification” of Ukraine,” she said.

“Australia and partners will continue to impose costs on Russia’s egregious, unlawful and completely unjustified war on Ukraine. We again call upon Russia to withdraw its military forces immediately from Ukraine.”