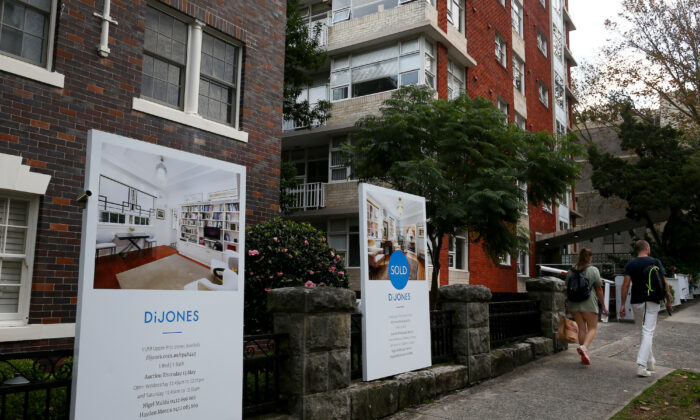 A 'sold' real estate sign is seen outside a high-rise apartment block in the suburb Kirribilli in Sydney, Australia, on May 8, 2021. (Lisa Maree Williams/Getty Images)
Australia

After a year of rapid growth, Australia’s national median house price has broken the $1 million (US$714,000) mark, according to Domain’s latest House Price Report.

A house in Sydney at median price rose to $1.6 million over the year, the median house prices in Melbourne and Canberra have passed $1.1 million, and remaining capital cities sit between $600,000 and $800,000.

Domain’s chief of research, Nicola Powell, said a million-dollar median price was a psychological barrier to entering the market.

“People who don’t own a home yet are faced with such dramatic rises in prices in such a short time [and] at a time when rents are also rising. Wages growth does not keep up with that,” Powell said. “If you don’t own a home, if you’re a parent, how on earth will they ever afford it?”

While it was unlikely that prices had reached their peak, it had evidently cooled, particularly in Sydney and Melbourne where the lack of affordability was pushing buyers out of the market.

“There is a waning demand playing out across a number of metrics—clearance rates in Sydney have dipped from 81 percent in the March quarter to 68 percent in the December quarter and prospective buyer inquiries have dropped 20 percent over the same period,” Powell said.

The rapid escalation of price has created a financial barrier for entry and upscale buyers, while wage growth has remained low.

Eliza Owen, the head of research at CoreLogic, said the affordability issues with houses was pushing people towards units.

In contrast, the Brisbane and Adelaide markets show no sign of slowing, with supply remaining low and demand remaining at elevated levels. As a result, a two-speed market has emerged across capital cities.

“In cities like Adelaide and Brisbane, prior to the pandemic, there was a drain of residents, but since the pandemic, they’ve seen a net gain of people choosing to live there. That changes the housing markets,” Powell said.