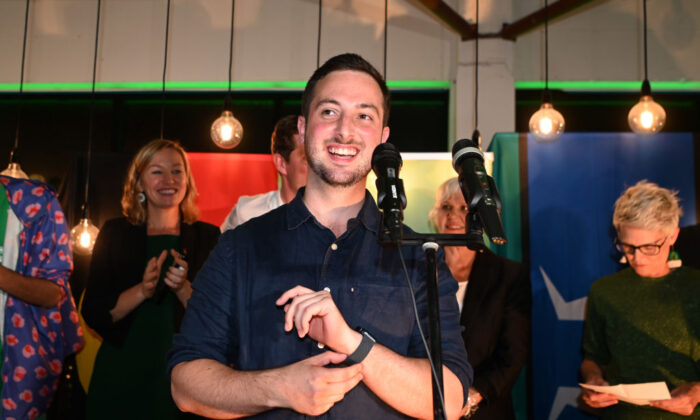 The Greens' candidate for the seat of Brisbane Stephen Bates speaks during the party's election night function on May 21, 2022 in Brisbane, Australia. (Dan Peled/Getty Images)
Australia

The Greens have declared victory after winning the federal seat of Brisbane, snatching the Queensland electorate from the Liberals and gaining a fourth spot in the House of Representatives.

Greens candidate Stephen Bates took the seat over Labor’s Madonna Jarrett after a close race and a tense week of vote counting for the electorate, which covers the city of Brisbane.

The Greens have won three seats in Queensland after also claiming Ryan and Griffith. Party leader Adam Bandt holds the seat of Melbourne in Victoria.

In his election promise, Bates pledged he would tackle the “climate crisis” by advocating for 100 percent renewable energy by 2030, manufacturing renewables in Australia, and investing in public transport.

“From the conversations we’ve had with people across Brisbane for the last 12 months, the mood has been people were angry,” Bates said while declaring victory on Saturday.

Bates said new Labor Prime Minister Anthony Albanese would have to work with the parliament that was given to him.

“Even if Labor does form a majority in the House, we will still be in the balance of power in the Senate,” he said of his predictions as votes are finalised.

“That gives us such a great opportunity to actually work with the Labor government to go further and go better on policies that we know will benefit the people in this country,” he said of the Greens’ climate agenda.

Jarrett said she had called to congratulate Bates.

“Although counting is still ongoing, it is clear that we won’t get across the line here in Brisbane,” she wrote on Facebook.

“While I am disappointed I could not be prouder of the campaign we have run here in Brisbane over the past 12 months.”

Outgoing Liberal MP Trevor Evans conceded defeat last Saturday as despite leading the three-candidate preferred count, he was unlikely to retain his seat due to preferences.

Greens leader Adam Bandt declared “the greenslide continues” in a statement on Saturday.

“Stephen’s fantastic win means the Liberals’ defeat is even more profound,” he said.

“We’re the most powerful third party in the parliament and we’re ready to fight for action on climate and inequality.”