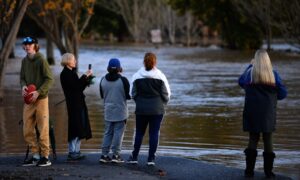 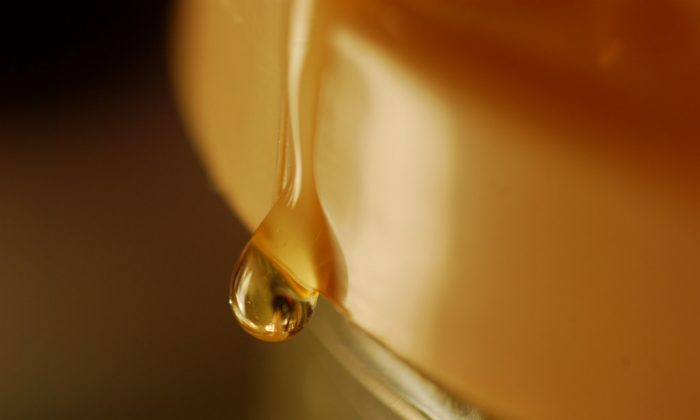 Stock photo of a drop of honey. (Dino Giordano/CC BY 2.0 [ept.ms/2haHp2Y]/Flickr)
Australia

The accusations stem from testing conducted by a leading scientific laboratory based in Germany, which found that almost half of the honey samples they had received from Australia were not 100 percent pure but had been adulterated—that is, blended with other substances not from bees.

Capilano’s Allowrie-branded mixed blossom honey came up as adulterated in six out of eight samples tested by the laboratory, the ABC reported.

All these samples came from brands that claim to be 100 percent honey on their packaging.

Concerns Over Honey from China

It all started when horticulturalist Robert Costa was worried that adulterated honey from China was being sold in Australia in brands that marketed themselves as pure honey, according to the ABC’s 7.30 Report.

So he hired one of Australia’s top law firms, King & Wood Mallesons, to obtain 28 jars of blended Australian and imported honey from across five Australian supermarket chains.

Through the NMR method, almost half of all the samples—12 of 28—tested positive for adulteration.

“Fake honey always existed, but in the last years it’s a growing problem because of the people who adulterate using more and more sophisticated methods, so it’s more complicated to detect it,” Beckh told 7.30. She said that the NMR method was the best for detecting adulteration.

Phil McCabe, the president of the International Federation of Beekeepers’ Association (Apimondia), said he will be referring QSI’s test results to Interpol for further investigation, the ABC reported. Apimondia recently said it would use NMR screening as part of its new honey competition rules, the ABC reported.

“By and large [the impurity] is some kind of syrup that’s been converted to look like honey, it tastes like honey,” he told the ABC. “Everything about it seems to be honey, when in fact it’s just sugar syrup or something else … Consumers don’t realise what they are buying and eating isn’t honey.”

Costa told 7.30 he was concerned that cheap, imported honeys, or blends of them, are hurting the bee industry in Australia. This would likely have flow-on effects for agricultural production given that an estimated two-thirds of Australia’s food production relies on pollination by honey bees, Costa said.

All the 28 samples were not detected as adulterated via the C4 sugar test, according to the German lab’s findings, the ABC reported.

The C4 sugar test is the method currently used in Australia to test for impurities in honey but the test cannot detect a range of substances in honey that are being used as bulking agents. For example, a mix of honey and rice syrup would pass the C4 test and register as pure honey, even though it is not.

“There’s probably half a dozen different ways that you can dilute, cut, and blend honey in order to cut cost,” Costa told the ABC.

NMR is not being used in Australia to test honey, but international experts, academics, and private companies increasingly rely on this method to detect fake honey, the ABC reported.

“We don’t have that particular testing in this country,” Costa said.

In a leaked email in July from the Australian Bee Industry Council (AHBIC)—Australia’s peak industry group—its executive director Trevor Weatherhead wrote to the Department of Agriculture and Water Resources to request that it review the way it tests honey and to adopt NMR over old C4 testing, the ABC reported.

Weatherhead said that there had been reports that suppliers who adulterate honey knew how to cheat the C4 tests.

Response from Capilano and Supermarkets

In a statement on Sep. 3, Capilano denied that any of its products were not pure honey. Capilano also rejected NMR as the best method to detect adulteration.

“Capilano Honey Limited has found NMR results to be inconsistent between batches and different laboratories assessing the same sample,” the statement said.

“NMR tests are conducted at European laboratories and the method’s essential flaw is the reliance on a database of reference honeys, and the database is underrepresented for honeys in our region,” Ben McKee, managing director of Capilano said in the prepared statement.

“It is essential for consumers to have confidence in that they are buying 100% pure honey. We cannot have one test saying one thing and another saying honey is 100% pure. That is where we find ourselves today,” Mckee said. “We stand by our Allowrie honey as being 100% pure honey.

“However customers have a choice and there are great quality 100% pure Australian honey products on the market such as our Capilano brand, supplied by over 600 Australian beekeeping families,” McKee said.

An ALDI Australia spokesperson responded to Fairfax in a statement on Aug. 31 saying that it had removed the honey products said to be adulterated from sale while it investigates the issue.

“If the investigations conclude that the product has been adulterated, it will be permanently removed from sale at ALDI and further actions will be taken with the supplier,” the statement read.

IGA responded in a statement saying that “All Black & Gold honey is sourced from a well known Australian-owned producer, and it meets the requirements of the Australian and New Zealand Food Standards Code. Production of the product is under the direct control of the Australian supplier.”

Woolworths, which carries the Capilano’s Allowrie brand on its shelves, responded in a statement saying that it “treats the accuracy of product labelling very seriously and is concerned to learn of these claims.”

“We will now work closely with our supplier to review the substance of the claims in detail before determining our next steps,” Woolworths said in its statement.

Coles had once carried Allowrie honey but in a recent range review in July, the supermarket removed the product from its shelves. A statement from Coles in response to the news of adulterated honey read: “We are proud to support Australian producers and the work of Australian beekeepers who do important work in pollinating plants and food crops all over the country. Our Coles brand honey is 100% Australian.”