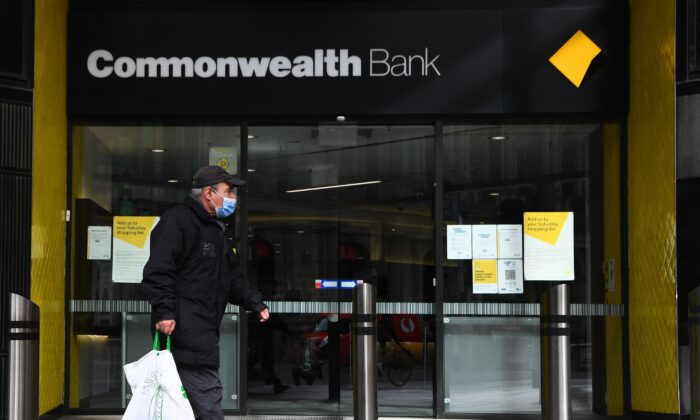 People walk past a branch of the Commonwealth Bank of Australia branch in Melbourne, on Aug. 11, 2021. (William West/AFP via Getty Images)
Australia

Australia’s largest bank has suddenly raised its fixed interest rates for homeowners and investors by a massive 1.4 percent on June 30, a move that has surprised the lending market.

According to an analysis by the financial comparison website RateCity, the Commonwealth Bank of Australia (CBA) lifted its one-year fixed rates for owner-occupiers to 4.99 percent, up 2.90 percent from one year earlier.

Similarly, the bank’s five-year fixed rates soared to 6.69 percent, an increase of 3.7 percent compared to the previous 12 months.

CBA also slashed its lowest variable home loan rates by 0.15 percent, down to 2.79 percent and 2.89 percent for home buyers with a 30 percent deposit and a 20-29.99 percent deposit, respectively.

“The bank is responding to the rising cost of fixed-rate funding and a market that refuses to believe the Reserve Bank of Australia will stop hiking the cash rate at around 2.50 percent,” she said.

Tindall also noted that the bank was offering fixed rates lower than two percent less than a year ago. However, the latest changes have pushed CBA’s lowest fixed rate up to under five percent and most of the other rates up to over six percent.

“It’s incredible to see fixed rates move this dramatically in such a short space of time,” she said.

“The sub-two percent fixed rates from 12 months ago now seem like a distant dream.”

Fixed-Rate Loans Account For A Small Percentage of The Market

Regarding CBA’s fixed-rate hikes, Centre for Independent Studies chief economist Peter Tulip told The Epoch Times that the development was not “a huge deal.”

“We have passed through a period in which fixed-rate loans were unusually popular, peaking at 46 percent of housing loans in August 2021,” he said, citing data from the Australia Bureau of Statistics.

“We are now returning to a more normal situation in which fixed-rate loans are a small share of the total.”

In addition, Tulip said that financial markets currently expected variable and fixed interest rates to rise quickly. Therefore, other banks would soon follow the CBA and lift their interest rates as well.

“In terms of implications, large increases in mortgage rates will lead to falls in house prices and a marked slowdown in construction,” he said.

CBA’s changes in fixed interest rates come as economists expected the Reserve Bank of Australia to raise the cash rate by another 0.5 percent to 1.35 percent at the next board meeting on July 5.