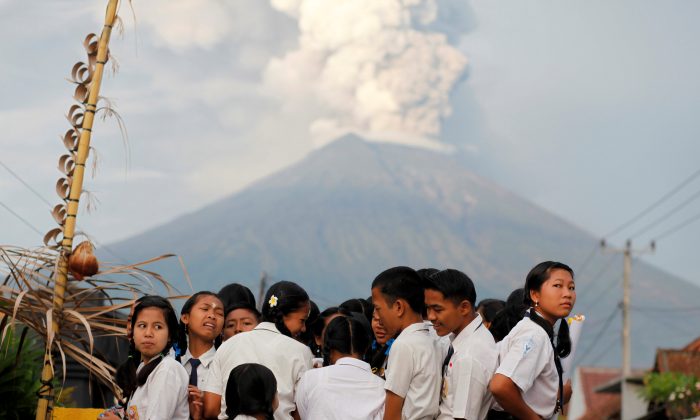 School children ride on the back of a truck on their way to school as Mount Agung volcano erupts in the background near Amed, Karangasem Regency, Bali, Indonesia. (Reuters/Nyimas Laula)
Australia

DENPASAR, Indonesia–Australian budget airline Jetstar will cancel nine flights out of the Indonesian holiday island of Bali on Friday due to a threat from volcanic ash, signaling that a departure window for visitors stranded by an erupting volcano may be closing.

The move followed a forecast that volcanic ash could hit operations at Bali airport, about 60 km (37 miles) southwest of the erupting Mount Agung volcano, the airline said.

The airport’s closure from Monday through part of Wednesday stranded thousands of travelers from Australia, China and other nations before the winds changed and flights resumed.

A column of white smoke and ash hung above Mount Agung, where tremors continue, meteorological officials said, although with decreasing frequency, while lava sparks flash at night.

Ash was visible to the southeast of Mount Agung, the Darwin Volcanic Ash Advisory Centre said, with reports indicating emissions of steam and ash.

“Volcanological sources indicate a larger eruption is still possible,” it said on its website.

The wind direction was blowing the ash, which can be hazardous to flying, towards the east and the airport was clear for normal operations, Indonesia’s transport ministry said in a statement, however.

Jetstar and its parent, Qantas Airways Ltd, had planned up to 18 flights on Friday to ferry 4,300 passengers home to Australia, including one by a Qantas 747 jet.

But nine Jetstar flights will be canceled after “a sudden change in today’s forecast for this evening in Bali,” Jetstar said in an update on its website.

Other airlines with regular Bali flights, including Singapore Airlines Ltd, Malaysia’s AirAsia Bhd and Garuda Indonesia, have not posted updates on flight plans for Friday evening on their websites.

A tropical cyclone south of the island of Java has altered wind direction in the area, including Bali, where it could bring heavy rains and strong winds until Saturday, the Indonesian Meteorological, Climatological and Geophysics agency has warned.

An estimated 90,000 to 100,000 people live in a danger area near the volcano in the eastern part of Bali, but tens of thousands have resisted government orders to evacuate.

The Praya airport on the neighboring island of Lombok reopened on Friday after its closure early on Thursday.

While stranded, tourists have been busy snapping lots of selfies.