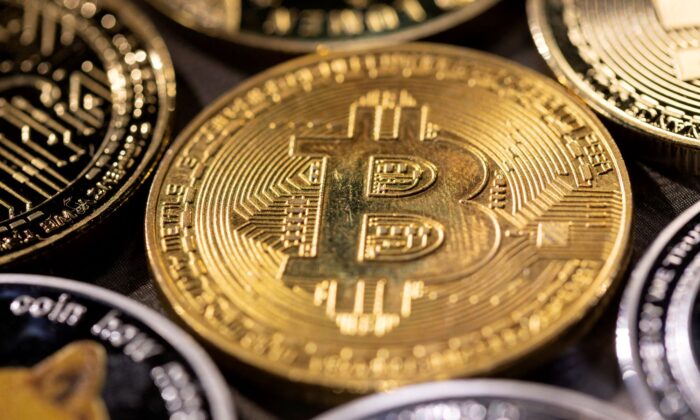 Representation of cryptocurrency bitcoin in this illustration taken on Nov. 29, 2021. (Dado Ruvic/Reuters)
Australia

The outcome of Australia’s upcoming federal election could be a determining factor in how quickly more Australians adopt and use Bitcoin, Ethereum, and other cryptocurrencies.

Fred Pucci at digital asset management firm Trovio Capital Management (TCM) said that some Australians had gone all-in on the crypto market for investments despite a lack of safeguards from the government.

“Some millennials are taking it to the extreme and putting all bets on,” Pucci said.

Market insights by the Independent Reserve, a global cryptocurrency exchange platform founded in Australia, revealed that 28.8 percent of Australians own or have owned crypto—up from 18.4 percent in 2020.

But Pucci noted that current measures, or lack thereof, dissuade more from joining the crypto wagon. In particular, the collapse of two Australian cryptocurrency exchanges—myCryptoWallet and Blockchain Global’s ACX—led to the disappearance of millions of dollars in investment funds.

Pucci, and others, believe that improving regulation would reassure consumers by ensuring better background checks on cryptocurrency exchanges and limit the possibility of future incidents.

“There might have been capital requirements and basic safeguards … That’s why the best exchanges are around the table, literally, in supporting and encouraging regulation—because they see it as differentiating their legitimate business.”

While Australia’s presiding treasurer, Josh Frydenberg, has garnered praise after setting forth plans to regulate the digital currency industry, uncertainty remains on how other political parties, such as the Labor party, will do the same.

Pucci noted that this forced the industry into a “weird limbo,” with future investment depending heavily on the election outcome.

“For the Liberals to have a policy that is going to help that market develop and be sustained with more of an Australian presence and more Australian protections for investors is going to be an attractive thing,” Pucci said.

“[But] if you look at the fine print of Treasurer Frydenberg’s document, the timetable for the key planks of this are not going to come through, assuming they win the election and parliament passes the legislation, until mid to late-2022,” Pucci says.

“Like the rest of the digital asset sector, we’re very pleased to see the government taking the industry seriously,” White said.

“The major source of uncertainty is not the policy that’s been announced; it’s actually the upcoming election.”

The current federal government’s crypto regulation plan follows a Senate inquiry into Australia as a technology and financial centre that focused heavily on digital currency. However, the opposition Labor party has yet to announce plans for regulation.

Read More
Cryptocurrency Now in the Sights of Australian Regulators

“The Senate inquiry was a bipartisan activity, and it would be great to see the opposition engage with the recommendations of the report to provide the certainty that the industry needs to make decisions about investment and hiring over the next year,” White said.

However, while regulation would tackle certain uncertainties in the industry, price volatility remains a concern for many others, with the Independent Reserve revealing that 36.5 percent of Australians said this was the reason for not investing in crypto.

Others have also debated the illicit market share occupied by cryptocurrency transactions, a nearly impossible task to accomplish due to the unidentifiable nature of public but anonymous transactions.

Chainalysis—an organisation whose goal is to “promote the safe adoption of cryptocurrencies by building trust among financial institutions [and] governments”—estimated in a report (pdf) that of all transactions in the first half of 2021, US$21.4 billion, or 2.1 percent, were associated with illicit activities.

But contrasting peer-reviewed research from 2018 titled “Sex, Drugs, and Bitcoin: How Much Illegal Activity Is Financed Through Cryptocurrencies?” estimating that 46 percent, or $76 billion, of bitcoin transactions per year alone, were linked to illegitimate transactions.