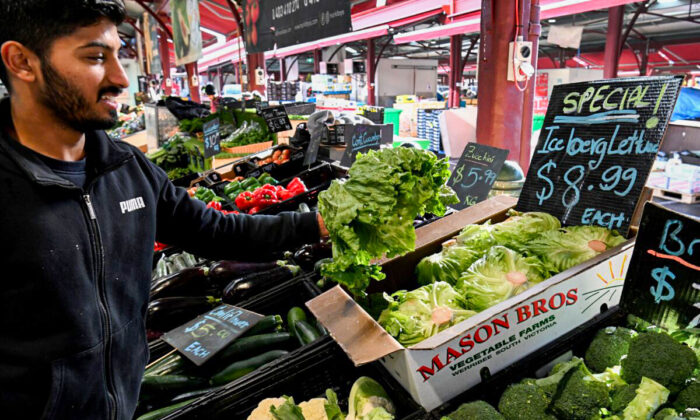 Syed Hyder adjusts a display of iceberg lettuce at a stall in Melbourne, Australia, on June 7, 2022. (William West/AFP via Getty Images)
Australia

Australia’s Fruit and Vegetable Shortages Will Not End Until September

Australian consumers will have to bear with the current fruit and vegetable shortages for another six weeks before seeing improvements, while supply will not return to normal until September.

Ash Salardini, the acting chief executive of the National Farmers’ Federation, said the cause of empty supermarket shelves could be traced back to the extreme weather in parts of northern New South Wales (NSW) and Queensland earlier this year.

“During the winter months, that’s where we get most of our fruit and veg … In four to six weeks, the rest of Australia should have some of those fruit and veg come online,” he said in comments obtained by AAP.

“We should have a lot less availability issues in four to six weeks time.”

Nevertheless, Salardini warned that supply chain disruptions could still affect fruit and vegetables’ availability even if more were harvested.

In its latest fruit and vegetable supply update, supermarket chain Woolworths warned customers of a continuous limited supply of many products.

In addition, herb availability would not improve until August due to poor weather.

Woolworths, general manager of fruit and vegetables Paul Turner, said heavy rains from earlier this year were still taking a toll on many producers.

“This has pushed back the planting and harvesting of crops, with reduced availability continuing to be exacerbated by cooler temperatures and low levels of sunlight,” he said.

At the same time, Coles, another supermarket chain, said the flood crisis in northern NSW and Queensland had led to the current shortages of berries, lettuce, beans, tomatoes, broccoli and herbs, as well as inflated the prices.

“Produce pricing is subject to supply, but as soon as volumes recover, we will be working hard to get prices down for our customers as quickly as we can,” a company spokesman said.

Earlier in June, a shortage of lettuce across Australia drove the price of iceberg lettuce on supermarket shelves up to $12 (US$8.6) each, prompting fast food restaurant KFC to replace the vegetable with cabbage.

Currently, in southeast Queensland, Coles is selling two smaller lettuces for the price of one as cold weather impacts growth.

“These lettuces haven’t fully grown due to the extremely cold weather,” the spokesman said.

“The initiative allows growers in the Lockyer Valley to use some of the iceberg lettuce crops that have been impacted by the recent wet weather and will improve availability for customers.”

Meanwhile, AusVeg spokesman Tyson Cattle said while fruit and vegetable supply might return to normal in the upcoming months, prices would stay at high levels.

“All growers’ cost of production inputs have gone up considerably, so we won’t go back to previous pricing levels, given that growers’ costs have increased … by 35 to 40 per cent,” he said in comments obtained by AAP.