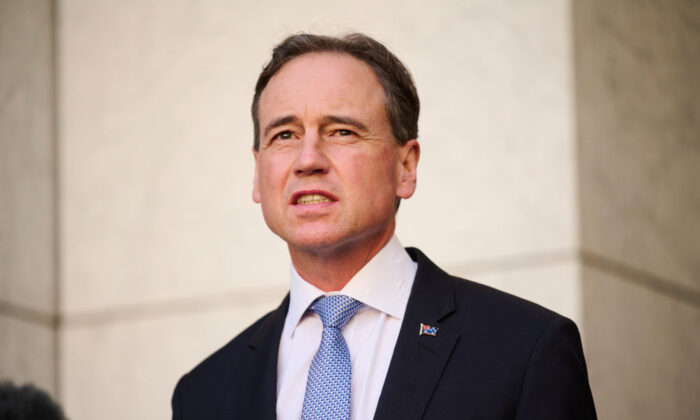 Australia’s COVID-19 human biosecurity emergency pandemic measures declaration will end when it lapses on April 17 and not be renewed, the country’s federal health minister announced on March 25.

“I am taking this decision now so as to provide forward guidance based on the advice of Professor Paul Kelly, the Commonwealth Chief Medical Officer,” federal Health Minister Greg Hunt said in a release.

“The emergency period was a crucial early decision in Australia’s pandemic response. It has saved tens of thousands of lives as Australia avoided some of the worst outcomes from the early spread of the virus and now has one of the highest vaccination rates in the world.”

Some of the federal pandemic measures that will end include pre-departure testing for international arrivals into Australia, by air or sea; restrictions on the entry of cruise vessels into and within Australian territory, which was already announced on March 15; and price gouging rules on rapid antigen tests.

Hunt noted that more than 500 million rapid antigen tests had now arrived in Australia and supply was abundant. That said, the country’s consumer watchdog will closely monitor the supply of tests to ensure price gouging does not occur.

But not all federal pandemic measures will end, with international travellers into and out of Australia still required to provide proof that they’re double vaccinated against COVID-19, the disease caused by the SARS-CoV-2 novel coronavirus.

Protective masks will also remain a requirement while on international flights. These maintained measures will be implemented under the non-emergency provisions of the Biosecurity Act.

The implementation of federal and state measures under the Biosecurity Act saw freedoms for Australians impinged over the last two years.

After the WHO declared SARS-CoV-2 a public health emergency of international concern on Jan. 30, 2020, federal lawmakers amended the Biosecurity Act to give the government powers to create and enforce public health orders to take measures to control the novel coronavirus by declaring a human biosecurity emergency.

After this, health officials could impose human biosecurity control orders on people who may have COVID-19. This was the federal and state governments’ main method of managing risks to human health, according to the Biosecurity Act. The federal powers extended to aircraft and vessels that entered Australian territory.

However, Australia didn’t always follow advice from the WHO on COVID-19. For example, Australia closed its international border in March 2020 against the WHO’s advice, potentially reducing the early transmission of the virus from arriving via international travellers.

“The Morrison government has taken strong action over the course of the pandemic to protect Australians. Shutting the international borders early was a tough but decisive action, which enabled Australia to manage the pandemic and minimise the loss of life,” Hunt said, referring to Prime Minister Scott Morrison’s Coalition party government.

“We thank Australians for their resilience, their cooperation, and their understanding in following the medical advice which has kept us safe.

“The past two years have been challenging, but we have shown the best of Australia—people caring for each other, working from home, homeschooling, and importantly being vaccinated,” he said.

During emergency declaration periods, which has been extended every three months since March 2020, by both the federal and state governments, state officers had powers to investigate and enforce penalties for noncompliance with COVID-19 health orders, such as fines and providing for warrants to enter premises. In some limited cases, officers could enter premises without a warrant or consent.

In addition to federal measures, states and territories could impose their own COVID-19 public health orders based on the medical advice of their chief health officers. In many cases, the measures implemented by these sub-national jurisdictions had far more impact on the day-to-day lives of the public.

For example, it was the state and territory leaders who imposed most restrictions, lockdowns, and vaccine mandates—with only the occasional pushback from the federal government.

Despite the primary aim of the pandemic measures under the Biosecurity Act being to protect human life, the government response saw the imposition of extreme restrictions that led businesses and venues to shut down, and placed significant limitations on attendance at places of worship, and at weddings and funerals.

At one point in July 2021, over half of Australia’s population of 25 million was subject to stay-at-home orders. At the time, some state leaders used their emergency powers to maintain lockdowns and restrictions until 70 to 80 percent of their state had been administered their first shot of a COVID-19 vaccine.

Former Prime Minister Tony Abbott has referred to some of the state government measures as a “health dictatorship.”

It is not yet clear if the sub-national state and territory governments will follow suit and allow their emergency powers to end.

The Queensland government, seven days ago, on March 18, extended their emergency public health declaration to 11.59 p.m. on June 24.

It is under these directions that thousands of workers in the health and education sector were suspended for not being vaccinated against COVID-19.

The Epoch Times also understands that many suspended Queensland teachers and school-based staff expect to be terminated before that state’s emergency public health declaration is due to end.