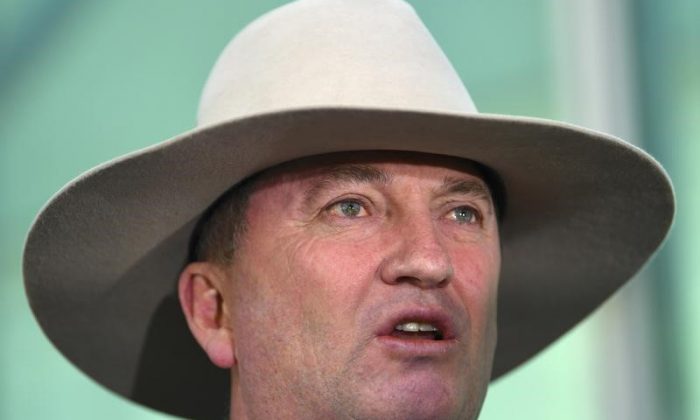 SYDNEY—A state branch of the Australian National Party has pulled its support for Deputy Prime Minister Barnaby Joyce because of reports about an extramarital affair with his former press secretary, the party’s Western Australia leader said on Tuesday.

Joyce, the National Party’s federal leader, has refused to resign since media said this month that he was expecting a child with his former staff member. He has maintained he has the support of his party.

“Mr Joyce’s actions have caused pain for his family but it is the ongoing damage Mr Joyce is causing the Nationals’ organization that is of greatest concern to me,” Davies added.

As the National Party leader, Joyce is automatically deputy prime minister under the conventions of a century-old coalition between his rural party and the conservative Liberals.

Joyce replied back to Davies, inviting her to discuss the matter further with him if she wished to do so, “I acknowledge your concerns however it should also be said that you don’t have a Federal member of Parliament in the National Party of Australia, your last member spending their time almost exclusively as an independent and only once or twice coming to the National Party room meetings.

“I also note, you are not in a Coalition in Western Australia and the WA Nats pride themselves on their ferocious independence. Therefore I find it surprising that a federal issue has so much momentum in the West when people in the east in National Party, have in the majority a different view – and to be quite frank, vastly more skin in the game.”

None of the 16 National Party members of Australia’s 150-seat federal parliament is from Western Australia so a loss of support from a state branch with no federal parliamentary presence is not expected to destabilize a government with a majority of only one seat.

The New South Wales and Victoria state branches of the National Party issued statements saying they would not get involved in the federal leadership. Nine National Party members come from those states.

Two-thirds of Australian voters want Joyce to resign over the affair, according to The Australian newspaper’s Newspoll, and there is concern that the disapproval of him could lead to fewer votes in state-based elections.

Joyce took a highly unusual week-long leave of absence this week at the urging of Prime Minister Malcolm Turnbull, who is due to travel to Washington.

Joyce would typically be acting prime minister but Finance Minister Mathias Cormann will be acting leader instead.

Joyce last week publicly criticised Turnbull for “causing further harm” by commenting on his affair. Turnbull has banned sexual relationships between ministers and their staff.

Veteran West Australian political analyst David Black said it was unusual for the state branch to withdraw support for a federal leader.

“He didn’t just refuse to resign but came out swinging.”

The National Party’s Western Australian branch is under pressure following a poor performance in the 2017 state election. The mineral-rich state is scheduled to go to the polls again in 2021.

“The Nationals brand across regional Western Australia has suffered as a result of Mr Joyce’s actions and he has become a distraction at both federal and state level,” the state leader, Davies, said.