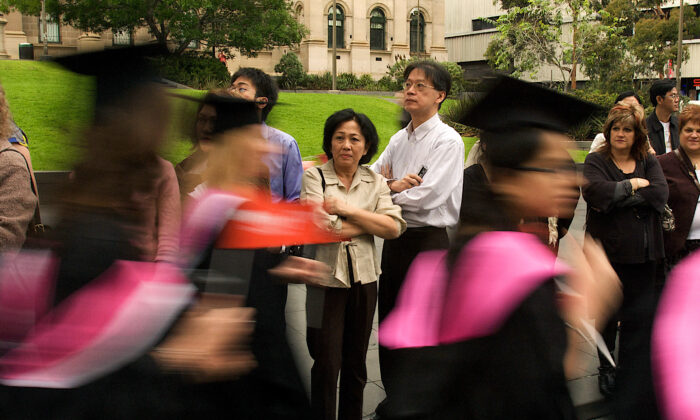 Students took part in a parade on Swanston Street to celebrate their graduation from a University in Melbourne, Australia, December 17, 2008. (Luis Enrique Ascui/Getty images)
Australia

About 300 jobs at Deakin University are at risk after it failed to reach agreement with the union on a COVID-19 recovery plan.

Deakin Vice-Chancellor Professor Iain Martin told staff on May 25 the institution would not sign the National Tertiary Education Union proposal put forward to mitigate the economic impact of COVID-19.

The union had called for temporary reductions in wages, salary increase deferrals and transfers to other duties, among other alternatives to protect jobs.

These measures were part of the union’s Jobs Protection Framework to offer a way out for universities severely hit by the impact of the virus.

The university has instead put forward a new plan that includes a reduction of 300 positions.

But the union has argued these job losses could be prevented if university workers could access the JobKeeper program.

“Deakin is a major employer in regional Australia and the impact of this will be disproportionate for a place like Geelong,” NTEU National President Alison Barnes said.

“Dan Tehan and Josh Frydenberg could have saved these jobs with the stroke of a pen using the $60 billion they thought they had already spent.”

Deakin’s drop in operating revenue is estimated at between $250 million and $300 million in 2021.

The university has drafted a plan to manage the next three years based on budget cuts, and the acknowledgement that it will have to spend more than it earns.

Professor Martin said the university had no desire to implement measures such as stand-downs, forced leave, or across-the-board pay cuts of up to 15 per cent.

“I acknowledge again that managing 2020 and the next two to three years is about far more than money,” he said.

“But without a solid and sustainable financial position we will not be able to make the impact generating contributions that will be needed across our communities.”

Deakin said it employed about 10,500 staff at the end of 2019, and argued the staff reduction represented about five per cent of the workforce.

The union claimed the 300 figure did not include a large number of casual and fixed-term workers who have already been sacked or stood down at Deakin University.

“As a university, we spend 55 per cent of our total revenue on staff,” Professor Martin said.

“While we will do everything possible to minimise staff impacts, we must look at our employment costs as well as continuing to minimise other expenditure to adjust to where we need to be.”

The university’s proposal has been sent to staff for feedback and consultation.