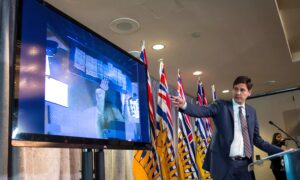 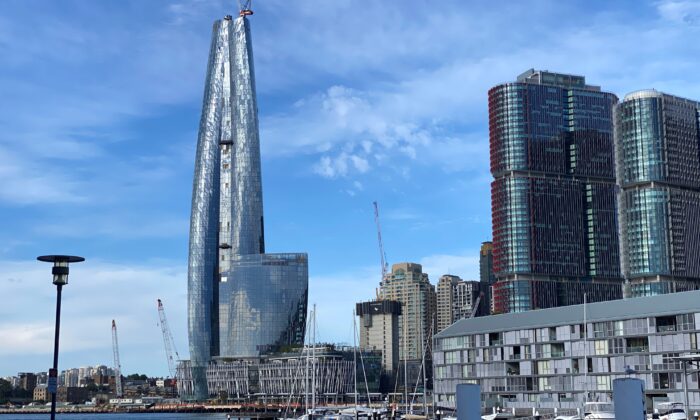 Crown Sydney and Barangaroo in Sydney, Australia, on Nov. 4, 2020. (The Epoch Times).
Australia

The New South Wales “Crown Inquiry” has recommended the Australian casino giant not be granted a gaming license for its newest resort in Barangaroo, Sydney, which is due to open next month.

The recommendation, while non-binding, has cast a shadow over the fate of the A$2.2 billion ($1.6 billion) waterfront Crown Sydney. Crown faces possible breaches of anti-money laundering and counter-terrorism financing laws.

“It is very, very troubling … Mr Barton (Crown CEO) has made a lot of concessions but at the moment, it is just extraordinarily troubling,” said inquiry commissioner Patricia Bergin.

Crown Resorts CEO Ken Barton had denied having any knowledge of how A$5.6 million in cash appeared in a dedicated room for high-roller gamblers at Crown Melbourne, an amount far beyond the A$100,000 limit set by the casino.

The inquiry saw video footage of stacks of cash, amounting to tens of thousands of dollars, being deposited at VIP rooms in Crown Melbourne, effectively bypassing “the cage”—the casino’s mandatory chip-issuing facility for all cash transactions.

The inquiry was also told that major banks, such as ANZ and Commonwealth Bank, had shut down accounts tied to the Crown’s casinos due to concerns of “high-risk cash deposits” from suspicious cash transactions totalling hundreds of thousands of dollars.

The inquiry will continue until Bergin issues her formal recommendations to the Independent Liquor & Gaming Authority (ILGA) on Feb. 1, 2021. Meanwhile, Crown Resorts will still power ahead with its new casino opening.

The company confirmed at its Annual General Meeting in October that Crown Sydney is on track for its Dec. 14 opening and is recruiting new staff even before the ILGA’s final ruling.

What’s Behind the Inquiry?

Last year, Crown Melbourne’s dealings with gambling agents made headlines when it was revealed junkets, who were tied to triads and organised crime syndicates in Macau, were luring Chinese high-rollers to offshore casinos.

Joint investigations by Nine Network’s media allege Crown turned a blind eye to money-laundering and exploited Australia’s visa system to fast-track visas for Chinese high-rollers, who promised to spend hundreds of millions on trips to casinos in Melbourne and Perth.

An exclusive interview by The Age with a Crown employee, Jenny Jiang revealed that the gaming giant gave staff huge incentives to break Chinese law, but then abandoned staff during an investigation by the authorities.

Jiang, who was among the 19 employees convicted and jailed for flouting Beijing’s gambling laws in 2016, accused the firm of disregarding gambling laws, adding that upper management kept pushing “every sales [staff] to meet more customers, get more business.”

She said staff were treated like a “used napkin you throw in the trash can” and that “money is way more important than the staff.”

In breaking her silence, Jiang claimed to have refused $60,000 to keep quiet about “commissions” that were paid out when high-rolling customers reached “appraisal targets,” gambling billions of dollars.

At the centre of the Crown saga is billionaire majority stakeholder, James Packer, who repeatedly denied knowledge of the firm’s illegal offices in Guangzhou and its under-the-table business activities in China.

At the inquiry, Packer claimed Crown’s breach of Chinese law showed a “serious failure of compliance” on the part of its management.

Packer denied influencing Crown’s operation but acknowledged being a key driving force in bringing Macau junkets to casinos in Australia.

According to leaked data, Zhou—a millionaire and fugitive on Interpol’s watchlist—also heads “Chinese Communist Party-aligned organisations [under the CCP United Front] in Melbourne designed to project Beijing’s influence in Australia.”

Chai, whose business partners allegedly facilitate sex-trafficking and legal services to Hong Kong triads and Italian mafia groups, is one of Crown’s top 50 VIP patrons, betting tens of millions of dollars at gambling tables, according to The Age.

Critics have said that Zhou’s ties with Crown, the Chinese leader’s cousin, and the notorious United Front, has granted him immunity from Chinese law enforcement.

But his lucky streak could end if Bergin and the ILGA rules against Crown Sydney’s gambling license next year.

Crown could be forced to either shut down its gambling operations or have them delayed until authorities are satisfied with its operations.

Crown is currently taking steps to improve its corporate governance and suspend its relationships with junket operators who try to attract high rollers to casinos using VIP offers.