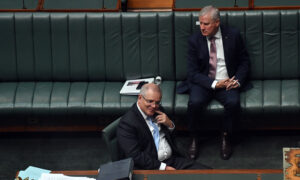 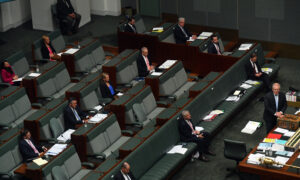 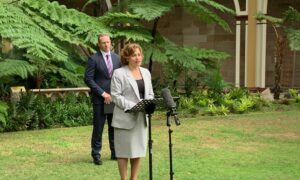 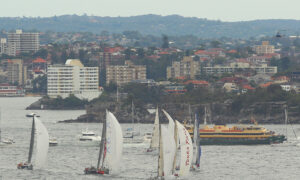 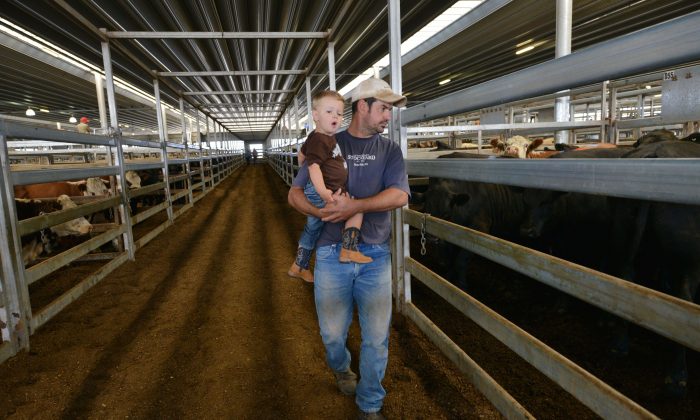 A farmer and his young son look at cattle at the weekly livestock sale near the town of Carcoar in central-west New South Wales, Australia, on Feb. 10, 2015. (Peter Parks/AFP/Getty Images)
Australia

SYDNEY—The Australian corporate watchdog may need to play a bigger role in regulating agricultural finance given the absence of redress options for borrowers, a powerful public inquiry heard on Monday, June 25, as it turned its focus to the country’s $50 billion farm sector.

Halfway through a year of scheduled hearings, the inquiry into financial sector misconduct has led to damaging revelations of careless and at times fraudulent lending practices, wiping out tens of billions of dollars from Australian bank valuations, spurring major asset sales and leading to executive departures.

The so-called Royal Commission’s latest round of hearings is focusing on declining access to banking services for the 6.9 million Australians in rural areas, the inflexibility of lenders toward farm-specific challenges like weather, trade disputes, and lack of customized regulations for the sector.

The Australian Securities and Investments Commission (ASIC) may need to take a more hands-on role in farm finance as some rural lenders, such as the non-bank ones, are not covered by existing complaints-handling systems, the regulator’s head of assessment and intelligence, Warren Day, told the inquiry.

“There’s certainly an argument for that,” he said, referring to the prospect of greater ASIC involvement in rural lending.

Farm borrowers benefit from more flexible terms governing non-bank loans but for non-bank lenders “responsible lending (rules) aren’t there so there’s an argument that those are required”, he added.

For bank-originating farm debt, ASIC was concerned lenders changed without warning or explanation loan contract terms for farm businesses that were late with payments or in default.

“The common complaint to us is the borrower can’t get a reconcilable statement about how the bank has constructed the default or penalty rate to begin with,” he said.

“It’s still surprising to us … that a bank, that is in the business of providing statements of account, seems to have problems providing a reconcilable statement about what is owed.”

The lawyer leading the inquiry hearings, Rowena Orr, said she will call witnesses to testify about how the country’s biggest lender, Commonwealth lender Australia, and third-biggest lender, Australia and New Zealand Banking Group, treated rural customers they acquired after major M&A deals in the years after the 2008 financial crisis.

The hearing continues on Monday.

By Byron Kaye and Paulina Duran