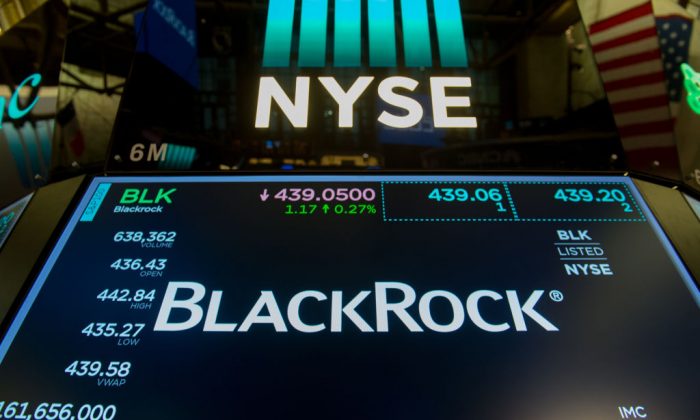 The trading symbol for BlackRock is displayed at the closing bell of the Dow Industrial Average at the New York Stock Exchange in New York, on July 14, 2017. (BRYAN R. SMITH/AFP/Getty Images)
Australia

Australia’s competition watchdog should receive new powers to stop any potential merger that could see “mega-funds” like U.S. giants BlackRock, Vanguard, and State Street widen control over an industry, according to a parliamentary committee.

On April 11, the Standing Committee on Economics in Australia tabled its report examining the influence of the mega-funds, which also comes amid ongoing concerns that funds like BlackRock are using the leverage they have over big companies to compel them to adopt social justice initiatives such as gender equality and climate change.

At the root of the inquiry is the issue of “common ownership,” which refers to the situation where one entity simultaneously owns the shares in competing companies within the same industry.

“If financial markets are dominated by a small number of large investors, or if the same investor owns a significant stake in competing businesses, the evidence is piling up that competition suffers,” Jason Falinski, chair of the Committee, said in a statement. “That can lead to higher prices, lower quality goods and services, and lower relative wages—all of which are serious concerns.”

An example of common ownership is BlackRock and Vanguard’s five percent stake in each of Australia’s four major banks, Commonwealth, ANZ, Westpac, and NAB.

In the United States, the two mega-funds and State Street are the largest shareholders in 88 percent of the S&P 500.

Among the list of recommendations from the Committee was for the Australian Competition and Consumer Commission (ACCC) to actively monitor the extent of common ownership and for the body to have the power to block any mergers between major companies that could see mega-funds expand their control.

Another was for “proxy advisors” to be formally recognised as providers of financial services, a move that will require such companies to be licenced.

In April 2021, ACSI, which represents 37 retirement funds in Australia, said it would recommend its shareholders vote against the re-election of company directors deemed to be “moving too slowly” on climate change action.

In the same month, CGI Glass Lewis backed one shareholder’s push for energy firms, Woodside Petroleum and Santos, to report how they will allocate funding so the company aligns with climate change goals in the Paris Agreement.

“Proxy advisors provide institutional investment funds with advice on how to engage with companies that they invest with, which often involves taking positions on remuneration resolutions and matters involving environmental, social, and governance (ESG) concerns,” the report stated. “This in and of itself would not be an issue; however, the current practices of proxy advisory firms requires greater scrutiny.”

The movement is grounded partly in the actions of student activists in the 1970s, according to Stephen Soukup, author of The Dictatorship of Woke Capital: How Political Correctness Captured Big Business.

Beginning on college campuses about 35 years ago, students upset that their universities had investments in South Africa, which was then operating apartheid, began pressuring administrators to divesting from the country.

Soukup said this later morphed into socially responsible investing, where investors could set up screens to block companies that didn’t align with their values.

“Within the last 10 years or so, the new version of socially responsible investing, which goes by the initials ESG, began to be slightly more aggressive and has grown more and more aggressive as time has gone by,” Soukup told The Epoch Times’ “Crossroads” program.

“This has become sort of the de facto way to achieve social ends within this community of professional investors, who have moved significantly to the left over the past quarter-century,” he said.