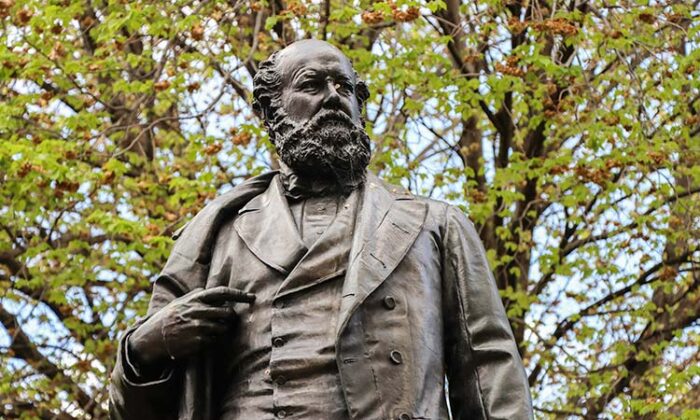 The Hobart City Council in Australia’s island state of Tasmania is proposing the statue of its first premier, William Crowther, in the city’s Franklin Square be removed—a move estimated to cost the council tens of thousands of dollars.

Crowther was a surgeon, naturalist, and the first medical practitioner to serve as Tasmania’s state leader.

He was suspended from his role as an honorary medical officer in March 1869 after he removed the skull of Aboriginal Tasmanian man William Lanne and sent it to the Royal College of Surgeons in London.

On its website, the Hobart City Council committee said that “despite Crowther’s achievements in public life, his mistreatment of Lanne’s remains understandably is a source of distress for Tasmanian Aboriginal people in particular.”

“The City of Hobart felt it was the right time to explore this contentious part of the City’s history,” it added.

In 2021, an Aboriginal artist painted the statue’s head and hands red to represent Crowther’s mutilation of Lanne.

Committee chair, Councillor Zelinda Sherlock, told The Mercury newspaper that the project received the support of all elected members and was in line with the sentiment of “the majority of Hobartians.”

“The bulk of the comments the project received demonstrated that the community wanted something practical done about the statue,” Sherlock said.

“I encourage everyone to read the report.”

‘Which Statue is Next?’

However, Councillor Simon Behrakis opposed the plan, saying it wastes the council’s time and resources—panning the council for being “more interested in virtue signalling than service delivery.”

“That the City of Hobart is considering spending tens of thousands of ratepayer dollars, months out from an election, to remove a statue in Franklin Square betrays the out-of-touch attitudes of this Council—and its distraction with woke left-wing issues—over working on solving issues that actually affect the lives of Hobartians,” he wrote on Facebook on Aug. 1.

“There are numerous issues which the community have signalled that Council is falling behind on in its delivery, primarily planning and housing, parking, and congestion.”

Meanwhile, historian Reg Watson was concerned that this would set a precedent for statues of historical figures to be removed.

“To me, politics comes into play here. The statue should be left alone, and my fear is, what statue is next?” he told the ABC in 2021.

“A suitable interpretation plaque can be placed next to the statue in the future, with the sad story told, but attacking statues is an American fashion.’