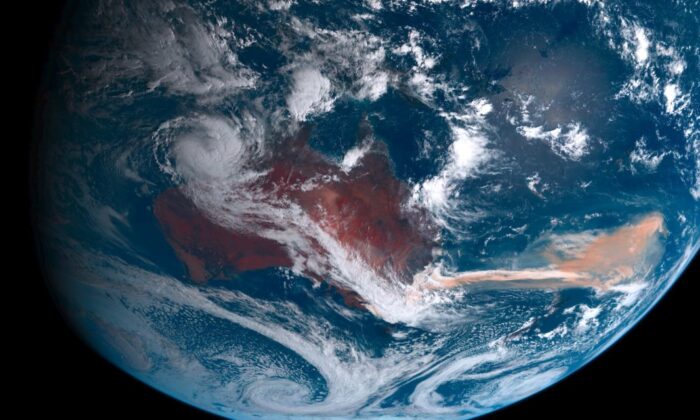 Australia’s devastating Black Summer bushfire season gave life to a bloom of phytoplankton larger than the size of Australia in the Southern Ocean, a study has found.

An international team of authors found the bloom, that took place between New Zealand and South America, was unlike anything measured before in the area.

The research published on Sept. 15, used satellite data to understand how the fires were responsible for the algae bloom.

“The phytoplankton bloom in this region was unprecedented in the 22-year satellite record and lasted for around four months,” co-author Professor Peter Strutton said.

“What made it more extraordinary is that the part of the season when the bloom appeared is usually the seasonal low point in phytoplankton, but the smoke from the Australian bushfires completely reversed that,” he continued.

Scientists followed the large aerosol plumes from the bushfires that reached altitudes of 16 kilometres (10 miles) and blew large clouds of smoke over the Southern Ocean.

This smoke transported low but significant enough iron levels into that area, which is vital to phytoplankton growth, just like soil nutrients to growing plants and vegetables.

“As an example, we found the fires on just one day, Jan. 8, deposited 25 percent of the black carbon and iron for the whole of January into that part of the ocean,” study contributor Jakob Weis said.

Strutton said the size of the bloom that followed was comparable to “transforming the entire Sahara desert into a moderately productive grassland for several months.”

These microscopic algae are nature’s carbon dioxide absorber, dubbed the ocean’s “biological carbon pump,” and are responsible for most of the transfer of CO2 from the atmosphere into the ocean.

Through photosynthesis, phytoplankton can consume carbon dioxide, just like trees and plants.

“This enormous, unprecedented algal bloom could have profound implications for carbon dioxide levels in the atmosphere and for the marine ecosystem,” the authors wrote. “But so far, the impact is still unclear.”

Another study, published on the same day by Dutch researchers, found that the Black Summer bushfires released an estimated 715 million tonnes of carbon dioxide.

Strutton and his fellow co-authors estimate that the bloom absorbed 680 million tonnes of carbon dioxide—or around 95 percent of the emissions from the bushfires based on the Dutch study’s estimates. However, they do not know if the CO2 was permanently absorbed.

“If they’re mostly eaten and decomposed near the ocean’s surface, then all that CO₂ they consumed comes straight back out, with no net effect on the carbon balance in the atmosphere,” they said.

Phytoplankton is also vital to the aquatic ecosystem as they form the foundation of the food chain.

However, there are a few phytoplankton species that can produce toxic or poisonous chemicals and cause harm to aquatic wildlife.

The group of scientists did not look into the bloom’s broad effect on the marine ecosystem but noted that it should have provided an abrupt injection of food for the fish and other organisms.

“It’s also worth noting this huge bloom occurred at a time of year when phytoplankton are usually in decline in this part of the ocean,” they said. “But whether there were any long-lasting effects from the bushfire-fuelled phytoplankton on the climate or ecosystem is unclear because we still don’t know where they ended up.”