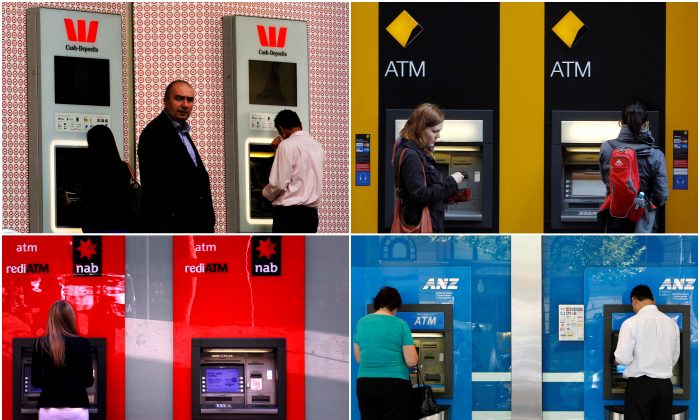 Australia’s major banks are facing the highest risk from money laundering and terrorism financing (ML/FC)  among all banking institutions in the country, according to AUSTRAC’s latest series of banking sector risk assessments released on Sep.6.

AUSTRAC warned that the criminal environment facing the big four—the Commonwealth Bank (CBA), the National Australia Bank (NAB), ANZ and Westpac—is complex and extensive, with money laundering being the primary threat, followed by tax evasion, drug trafficking, fraud and scams. The banks currently are responsible for 47 million customers and 73 percent of all assets in Australia.

AUSTRAC CEO Nicole Rose said it’s vital for banking institutes operating in Australia to work with the government and law enforcement to protect Australia’s financial system and Australians from serious and organised crimes.

“Criminals will exploit any gaps and use sophisticated methods for their own personal greed,” she said in a statement, noting the challenges associated with “a rapidly changing financial system” and “advances in technologies and platforms”.

The criminal methodologies targeting the major banks are “highly varied,” ranging from a high level of misuse of their cash deposit infrastructure to the purchase of high-value assets, like real estate. However, the report notes that the financial products most vulnerable to ML/FC are transaction accounts, credit card accounts, savings accounts, bank cheques and home loans.

It also highlighted that the major banks had a “nexus to many known or suspected cases of terrorism financing in Australia.”

Further, the assessment found that the major banks have a “mixed record” of applying risk mitigation strategies, despite having committed significant investments to counter money laundering and terrorism financing.

“There have been significant and systemic deficiencies detected in the subsector over recent years,” the report said. “Governance and assurance around AML/CFT (anti-money laundering and counter-terrorism financing) compliance have been identified as a particular concern, and risk mitigation strategies are not always applied consistently.”

Over the last few years, AUSTRAC has ramped up the scrutiny over the financial sector for compliance with the anti-money laundering and counter-terrorism financing (AML/CTF) legislation, giving some major banks hard lessons.

Last September, Westpac Banking Corp was ordered to pay a $1.3 billion ( US$9.600 million) penalty for “contravening the AML/CTF Act on over 23 million occasions”,  which meant “AUSTRAC and law enforcement were missing critical intelligence to support police investigations.”

These include failing to report to AUSTRAC  international transactions worth $11 billion, and the insufficient monitoring of customers whose account activities were consistent with the funding of child exploitation material.

In June this year, AUSTRAC initiated a formal enforcement investigation into NAB, expressing its concern over the bank’s potential ongoing non-compliance with customer identification procedures, customer due diligence, and compliance with  AML/CTF program.