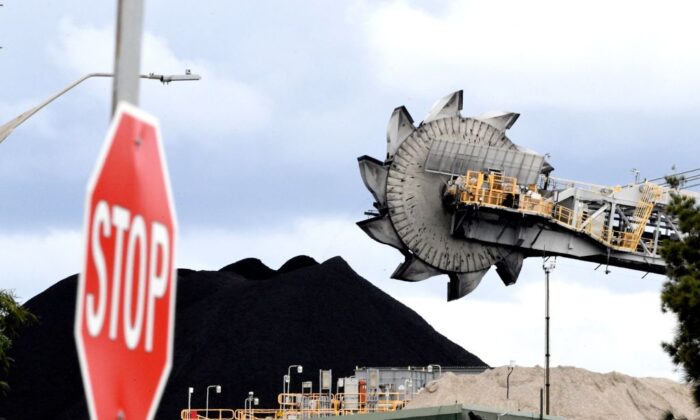 A bucket-wheel dumping soil and sand removed from another area of a Newcastle mine, the world's largest coal exporting port, in Australia on Nov. 5, 2021. (Saeed Khan/AFP via Getty Images)
Australia

Australia has recorded its 13th consecutive accounts surplus in the June quarter on the back of a continued commodity boom, with the trade surplus hitting a record high $43.1 billion (US$29 billion).

“The increase in the current account surplus was driven by higher commodity prices. Coal prices were elevated over the 2021-22 financial year, with annual exports of coal exceeding $100 billion (US$67 billion) for the first time,” Grace Kim from the Australian Bureau of Statistics said.

Global supply constraints drove up demand for Australian mining and agricultural commodities, driving up the exports of goods and services by 14.7 percent.

Demand for Australian coal exploded following the Russian invasion of Ukraine as European countries sought to diversify energy sources. Australian coal skyrocketed by US$99 in one day, one week after the invasion.

According to Newcastle coal, the benchmark for thermal coal in the Asia-Pacific region, the value of coal doubled over the 2021-22 financial year, ending at US$353 per tonne. It has since risen further to US$450 per tonne on Sept. 6.

“On the goods side, the volume of agriculture exports increased 5.9 percent on the quarter,” she said.

“Services exports also contributed strongly, with volumes up 13.7 percent on the quarter, with a rebound in education and tourism inflows leading the way.”

Future of Coal Within the Energy Transition

Meanwhile, a new report by the Institute for Energy Economics and Financial Analysis (IEEFA) called on Australian governments to transition away from thermal coal despite the profitability.

“Very high coal prices are a double-edged sword for the coal industry. At this stage of the energy transition, high prices will destroy long-term demand for coal even faster,” report co-author Andrew Gorringe said.

He noted that Australia’s traditional key export markets, namely Japan, South Korea, and Taiwan, were shifting away from reliance of imported thermal coal.

“Despite the recent rise in European imports of expensive Australian coal, the Russian invasion of Ukraine and the subsequent global energy crisis will only accelerate this transition,” report author Simon Nicholas said.

The report comes after Prime Minister Anthony Albanese told the resources sector that Australia would remain a “reliable provider of energy” as it worked with other nations to reduce emissions.

“I want to emphasise that our government will continue to work with your businesses to reduce emissions in a predictable and orderly way, underpinning the energy transition with certainty,” he said in his speech to the Australian Minerals Industry dinner.

“In the same way, Australia will continue to be a trusted and stable supplier of energy and resources to our key trading partners.”