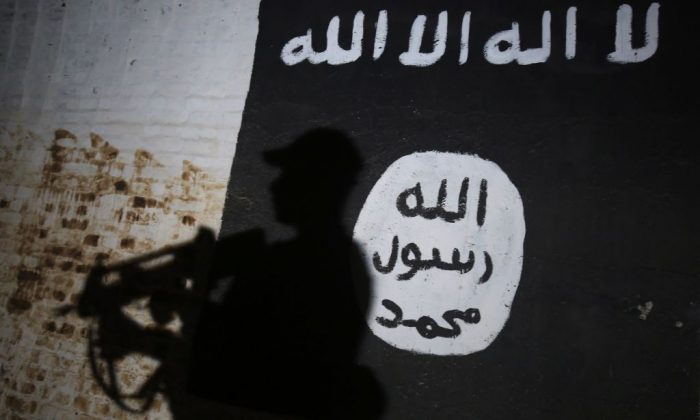 A member of the Iraqi forces walks past a mural bearing the logo of the ISIS group in a tunnel that was reportedly used as a training centre by the jihadists, in the village of Albu Sayf, on the southern outskirts of Mosul, on March 1, 2017. (Ahmad Al-Rubaye/AFP/Getty Images)
Australia

Hadashah Sa’adat Khan was an isolated and withdrawn teen when she began seeking out online relationships with people who support the terrorist organisation Islamic State.

The Melbourne woman, who was 18 at the time, was trying to “impress” another teenager in the U.S. when she helped arrange for him to join Islamic State in Syria, Victoria’s County Court heard.

Khan advised the man about what he needed to do to enter Syria and communicated with two other intermediaries to help him join IS.

The 24-year-old was sentenced to two years and six months in prison on Friday after pleading guilty to providing support and resources to a terrorist organisation.

Born in Afghanistan, Khan migrated to Australia when she was nine.

She left school in year 10 and was required to stay at home and assist her mother with household chores.

Feeling isolated from her community, between 2014 and 2016, she found solace in online relationships with Muslims of a similar age.

At the same time, Islamic State was rising in prominence and trying to attract and recruit young Muslim men and women from across the world.

Khan said the people she met online “were nice to me, they gave me advice, and they said they loved me”, the court heard.

“She found comfort and a sense of purpose in online relationships, which encouraged her support of extremist jihadi ideology,” Judge Richard Maidment told the court.

“The tenor of her online communications demonstrates a level of immaturity, eagerness to impress and keenness to endear herself to the male in the United States.”

He found Khan’s offending was on the lower end since the American man was already radicalised when they began speaking online.

He had already purchased a plane ticket to Morocco and had attempted to travel to both Iraq and Turkey, so Judge Maidment said much of her advice was “trite”.

But, he added: “It’s always a very serious offence when anybody dabbles in terrorist activity.”

“Your offending may have been at the low end of the scale, but it is nonetheless to be denounced,” he said.

In handing down the sentence, Judge Maidment told Khan, “you haven’t got a lot longer to serve” since she has been in prison for more than two years.

“You have the opportunity now to lead a better life, although you will need some help, do you understand that?” he asked her.

“I do,” Khan replied, over video-link from custody.

She was remanded in custody to serve her remaining sentence, with a non-parole period of one year and 11 months.