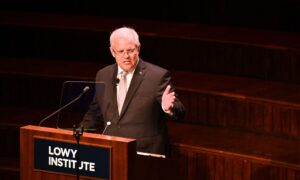 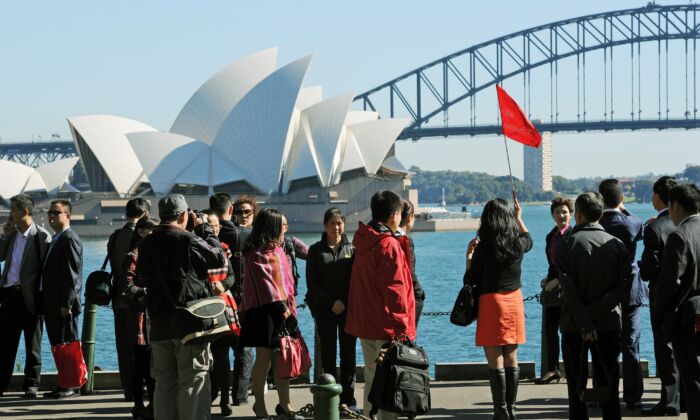 A group of Asian tourists arrive to have their photograph taken in front of the Sydney Opera House and Harbour Bridge, in this photo taken on May 8, 2012. (Greg Wood/AFP/GettyImages)
Australia

A new Lowy Institute poll has revealed trust in China has dropped since 2018. Australians are also supportive of economic decoupling from the communist state, and keen for tough new laws to sanction Chinese officials.

Overall, Australians were less trusting of other countries with the percentage of positive responses falling since 2018 for China (23 percent), Russia (24 percent), Indonesia (36 percent), India (45 percent), and the United States (51 percent)

The fall in trust towards the United States’ may be attributed to increasing issues surrounding inaccurate reporting in the media and “fake news” on the Donald Trump presidency, which has been blamed for distorting the public’s perception of the United States.

Despite this, 55 percent of Australians believed the Australia-United States alliance was more important to the country, compared to the 40 percent who thought the same about the Australia-China relationship.

Australians have become warier of China with 41 percent of respondents believing China is “more of a security threat to Australia” compared to 12 percent in 2018. Australians were also more supportive of moves to sanction Chinese officials involved in human rights abuses with 82 percent agreeing with such a policy, and only 17 percent opposing.

On Dec. 3, 2019, the Joint Standing Committee on Foreign Affairs, Defence and Trade launched an inquiry into whether Australia should implement new “Magnitsky” laws which would allow the government to sanction officials involved in human rights abuse. Sanctions include freezing assets and banning officials (including family and relatives) from travelling to Australia.

Majority of Aussies Want to Reduce Reliance on China

The poll also found Australians were less positive about the trading relationship with China with the latest results showing 55 percent of respondents saying China is a viable “economic partner” representing a major drop from 82 percent in 2018.

A large majority of Australians were also keen to decouple trade and economic reliance on China with 94 percent saying they were keen to “find other markets” to establish trade relationships. Only 5 percent of respondents opposed the idea.

The poll was conducted before the onset of a Beijing-instigated trade dispute with Australia that has seen it impose tariffs on Australian barley imports and ban imports from four Australian abattoirs.

The biggest threat to the country’s interest was drought and water shortages with 77 percent saying they saw this as a “critical threat.” The next major threats were COVID-19 (76 percent), a global economic downturn (71 percent), bushfires and floods (67 percent), and climate change (59 percent).

Under the same question, Australians found the following “important but not critical threats” including: military conflict between the United States and China over Taiwan (54 percent); the rise of authoritarian systems in government (51 percent); Iran’s nuclear program (50 percent); foreign interference in Australian politics (50 percent); and dissemination of false information or fake news (48 percent).