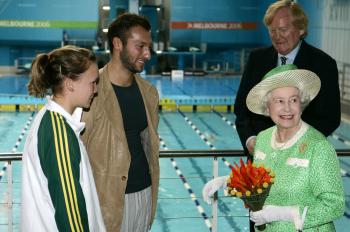 Queen Elizabeth II chats with Australian swimmers Kylie Palmer (L) and Ian Thorpe (2nd L) as Ron Walker, chairman of the Commonwealth Games Corp., looks on. The Queen, who was in Australia on a five-day visit, opened the 18th Commonwealth Games on March 1, 2006. (Rick Rycroft-Pool/Getty Images)
US

Australians in Favour of Monarchy, For Now

Raiatea Tahana-Reese
View profile
Follow
biggersmaller
Print
More Australians are in favour of retaining the British monarchy, according to a Nielsen poll conducted two weeks before the Federal elections.

The poll, published in Fairfax newspapers on Sunday, Aug. 29, revealed that public support for a republic has slumped to a 16-year low, according to AAP.

Opposition to a republic has grown by 8 per cent since 2008, with 48 per cent of people now saying they oppose constitutional change.

The last time backing for a republic was so low was in 1994, five years before Australia had a referendum on the topic.

On Saturday, Nielsen pollster John Stirton said there was a sense of inevitability that Australia would one day become a republic, despite the slump, AAP reported.

After a change of monarchy, a large number of Australians backing Prime Minister Gillard's stance on the issue, polled that the issue should be considered.

{etRelate 38637, 28237}According to ABC News, monarchist Malcolm Badgery believes the Queen's death will not lead to a rise in public support for constitutional change.

"There will be an outpouring of sentiment… there'll be a royal funeral and then the coronation," he said. "So I don't think it will be quite as easy as Julia Gillard makes out."