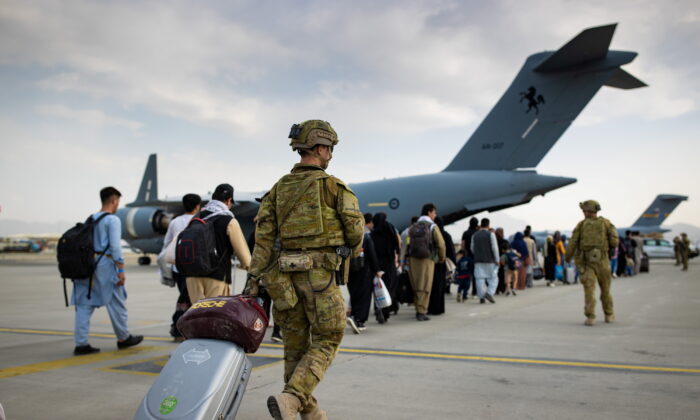 When Afghanistan’s capital city fell back under the control of the Taliban in 2021, Australian forces were among those called on to urgently evacuate its citizens and approve the departure of foreign nationals from the Kabul airport.

Airlifts needed to be coordinated in what was now a hostile territory, and bus convoys were required to reach stranded Australians.

A number of Australian military personnel involved in the evacuation of more than 4,000 people from Afghanistan have now been recognised in the Queen’s Birthday Honours List.

Among those receiving a DSM was Lieutenant Colonel Scott Holmes, who led the Ready Battle Group to evacuate Australian citizens and approve foreign nationals from the Kabul airport with his “steadfast approach and composure under pressure” cited for his commendation.

From the RAAF, Wing Commander Steven Duffy received a DSM after coordinating the airlift operation from the airport.

He was also recognised for his efforts on August 24, 2021, when he led a bus convoy mission through Kabul to rescue 86 Australians.

Two unnamed troopers were given Commendation for Distinguished Service for their work during the evacuation, while Major Matthew Hamill received that same recognition for his leadership.

Another RAAF pilot, Air Commodore Angela Castner, was made a Member of the Order of Australia in the military division.

She was recognised for her service in the logistics workforce, including for the Afghanistan evacuation.