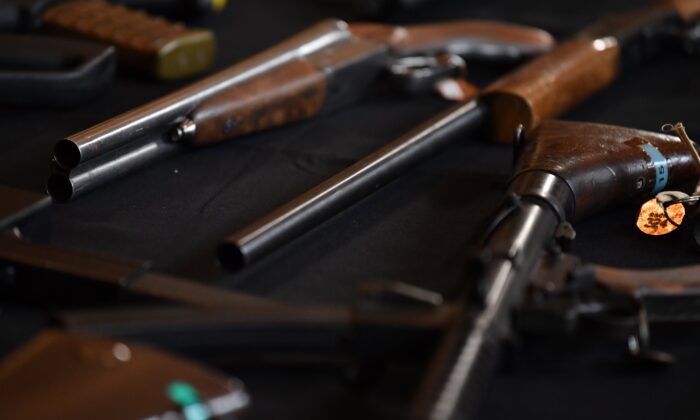 Over 17,000 firearms and weapons were surrendered in the most recent year of Australia's national gun amnesty. (Joel Carrett/AAP)
By Cindy Zhan

Cindy Zhan
Cindy Zhan is a reporter based in Australia. She covers national news with a focus on China-related issues. Got a tip? Contact her at cindy.zhan@epochtimes.com.au
View profile
and Victoria Kelly-Clark

Australians handed in almost 18,000 weapons, including a Vietnam-era flamethrower, automatic firearms, and a crossbow, to police during the first year of a national firearms amnesty.

A total of 17,543 firearms weapons and 606 weapons components, including suppressors and magazines, were surrendered between 1 July 2021 and 30 June 2022, according to the Permanent National Firearms Amnesty Annual Report issued on Jan. 20 by Attorney-General’s Department.

The National Firearms Amnesty program was approved in 2019 by the then Coalition government. However, the program was delayed until July 2021 due to the COVID-19 pandemic.

Over 8,000 rifles and nearly 3,000 shotguns were collected, with almost two tonnes of ammunition collected in the ACT, NSW, and Tasmania.

“The permanent amnesty provides the opportunity to surrender unregistered firearms to law enforcement, without penalty or threat of criminal liability,” Attorney-General Mark Dreyfus said in a statement.

“It is an important measure to reduce the number of firearms circulating in our community and keep Australians safe.”

Nearly Half Surrendered Weapons Because ‘Unwanted’

Just under half (48.7 percent) of all 247 survey respondents said they chose to surrender their firearms because they did not need or want the firearm anymore; 23.5 percent obtained the firearms as a family heritage, and 21.1 percent had been given it by a family member or friend.

Over 15 percent surrendered their firearms due to a sense of responsibility. and 1.2 percent indicated they were surrendering to avoid being charged with a firearms offence.

“The report released today found Australians who surrendered firearms in that time period were primarily motivated to do so out of a sense of responsibility or because they did not require them,” Dreyfus said.

“The Albanese government thanks those Australians who have participated in the permanent amnesty and urges gun owners to continue to hand in their unregistered or unwanted firearms.”

The federal government encouraged those with unregistered or unwanted weapons to surrender them anonymously without penalty. The process for surrendering a firearm in each state or territory is available on the Crime Stoppers website.

Australia boasts one of the strictest gun laws in the world, largely due to the Port Arthur massacre, a mass shooting that occurred in the island state of Tasmania in 1996, which killed 35 people and wounded 23 others.

In 2016, the Australian Criminal Intelligence Council estimated that there could be around 260,000 illegal firearms in Australia. However, the annual report (pdf) noted that the “exact extent of the Australian illicit firearms market cannot be determined as no historical data is available on its size prior to the implementation of the National Firearms Agreement in 1996.”

They also noted that if United Nations Office on Drugs and Crime estimation data was used, the figure could be as high as 600,000, which in a population of 26 million suggests that one in every 43 Australians potentially could access an illegal firearm.

Criminology Prof. David Bright, in a September 2022 media release, said that there was a large pool of illegal firearms in Australia for criminals to tap into, with police measures only able to recover tiny fractions each year.

“Our research found that the black market for illegal firearms is closed to the general population, but if you are well connected and trusted within criminal circles, it is surprisingly easy to get your hands on a gun,” Bright said.

“Interview subjects were generally cautious but frank in the responses they gave us. Many interviewees told us they could get a gun within a matter of hours after leaving jail – it was just that quick and easy for those who were well connected.”

In excerpts from interviews completed by the university study, respondents explained that it was extremely easy to get a gun.

“Couple of days, a week … I’ll call up, make a few phone calls, and within a week, I’d have guns here, and I’d have a rifle here,” one prisoner told Bright.

Another said he could have gotten one within half an hour.

“If I wanted one, I would have got one … within probably half an hour. As long as it takes to drive somewhere, I could have gone and … picked one up,” another prisoner said.