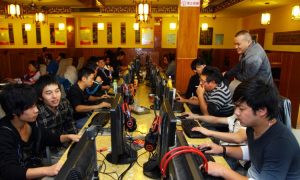 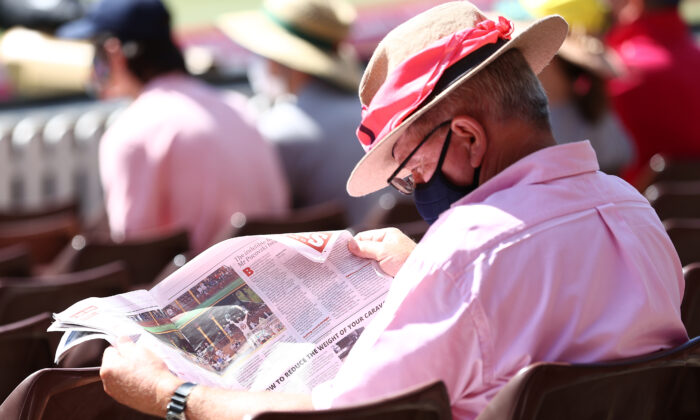 A spectator looks at a newspaper photograph of Steve Smith of Australia on Jane McGrath Day during day three of the 3rd Test match in the series between Australia and India at Sydney Cricket Ground in Sydney, Australia on Jan. 9, 2021. (Ryan Pierse/Getty Images)
Australia

A recent survey has revealed high levels of scepticism at how objective Australian media outlets are, as more people begin placing trust in their own research and other institutions.

Research from Edelman’s 2021 Trust Barometer (pdf) found 68 percent of Australians believed local news organisations were more concerned with supporting an ideology or political position than they were with informing the public.

While 59 percent believed the media was not doing well at being objective or non-partisan.

Lastly, 64 percent believed journalists and reporters were purposefully trying to mislead the public by saying things they knew were false or exaggerated. This finding came despite the responses indicting an 11-point increase in trust for journalists.

The Edelman Trust Barometer survey was conducted globally online across 28 countries, between Oct. 18, to Nov. 18, 2020. There were 1,150 respondents in each country across the general population and higher socio-economic class.

Overall trust in traditional media and search engine sources has seen a steady decline since 2018 to 2019. In contrast, information from social media, and media owned by companies, governments, and organisations, saw a significant increase since last year.

The barometer classifies a source as “trusted” when it scores 60 points or higher on the scale. No source reached this benchmark.

The research reflects findings last year from the News and Media Centre at the University of Canberra, who found trust in mainstream media in Australia was on a downward trend, only to receive an upward swing during COVID-19.

According to David Flint, former head of the then-Australian Broadcasting Authority and current Epoch Times contributor, “It is not surprising that trust in traditional media sources has been steadily declining. This reflects a change which began in the United States in particular (with the reporting on former U.S. President Donald Trump).”

“The media has always been entitled to an editorial position, but the traditional view is expressed best in the adage, ‘Comment is free, but facts are sacred,'” he told The Epoch Times.

“What we have seen in recent times is that it is very difficult for the average reader or viewer to distinguish between the two.”

The Trust Barometer did find however that trust levels towards various institutions increased across the board. However, it was the employer-employee relationship which became the clear winner.

Employers were the most trusted institution, with 78 percent of Australians trusting their employer over businesses (63 percent), NGOs (62 percent), government (61 percent) and media (51 percent).

“Australians more than ever turned to their employers for guidance, reassurance and information they can trust,” Michelle Hutton, CEO Australia and Vice-Chair of Asia Pacific at Edelman, said.

“The workplace-home divide has been broken down, and employers have embraced a new role in their employee’s lives. In an environment that demanded empathy and transparency, a strong bond of trust has resulted between organisations and their people.”