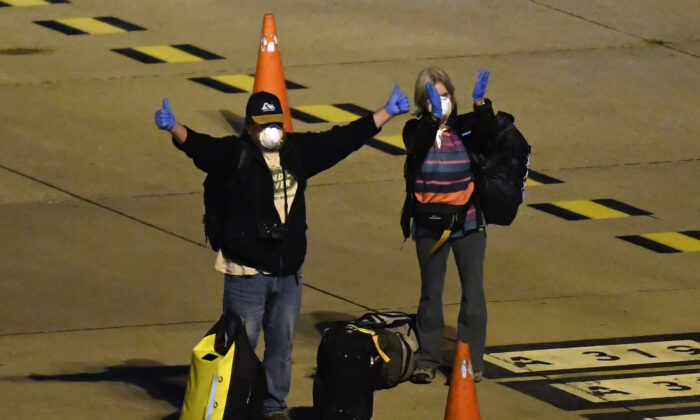 Passengers from the stranded Antarctic cruise ship, the Greg Mortimer, cleared of COVID-19 board a flight to Australia from Carrasco International Airport in Montevideo, Uruguay, on April 11, 2020. (EITAN ABRAMOVICH/Getty Images)
Australia

A medical flight from Uruguay landed at Melbourne Airport Sunday morning carrying 96 Australians who were aboard the Antarctic cruise ship Greg Mortimer.

For two weeks, passengers were confined on the Mortimer, nervously waiting for assistance as the number of passengers showing symptoms of the COVID-19 disease grew rapidly.

The Mortimer was about four days into its voyage from Ushuaia, Argentina, to the Antarctic before it had to turn back when a passenger started to show signs of fever. At first arrival in Montevideo, Uruguay, on March 27, local authorities did not allow the 217 passengers and crew on board to disembark due to the likely COVID-19 cases and the risk to the local community.

Later, Uruguay decided it would send medical professionals on board to assist. With testing, 128 of those aboard tested positive with COVID-19, with some being asymptomatic and others showing severe symptoms requiring further treatment.

Uruguay authorities enacted a “humanitarian corridor” with strict biosecurity measures to bring over 100 Australians and New Zealanders back home. Passengers saw their holiday trip, for which they paid in the vicinity of A$78,000 ($50,000), go from luxury Antarctic cruise to a “harrowing time.” When Uruguay officials extended their help, there was much gratitude on board.

“We would still be out on the seas if it wasn’t for the Uruguayans and their very benevolent attitude towards us and they are to be thanked in any way that I can say it,” passenger and Melbourne orthopedic doctor John Clifford told Nine newspapers.

Uruguay foreign minister Ernesto Talvi had a farewell message for those passengers cleared to head back to Australia. “Safe travels! Hope to see you back soon!” he said.

The 96 Australians from the Mortimer are among 1,200 Australians making their way back home from overseas this Easter weekend, including from India and Peru. The Australian Government will be overseeing the arrival of most of these repatriation flights, with help from national airline Qantas.

According to the Department of Human and Health Services, as of 6 p.m. on April 12, Victoria has 1,268 confirmed cases of the CCP virus. Currently, 44 people are in a hospital, including 16 people in intensive care. There have been a total of 14 deaths, while 1,015 people have recovered after contracting the virus.

Victorian State Premier Daniel Andrews announced that the state of emergency will be extended until midnight on May 11. The measures are designed to “flatten the curve” of CCP virus cases.

With just three new cases recorded in Victoria on Sunday, the premier said the restrictions were working.

“We are aggressively tracing our outbreaks, and making sure this virus does not get away from us,” he said. “If it does, our health system will simply be overrun and people will die.”

Australia has detected a total of 6,289 CCP virus cases since the pandemic reached its shores; 57 have died.

With reporting by the Australian Associated Press.