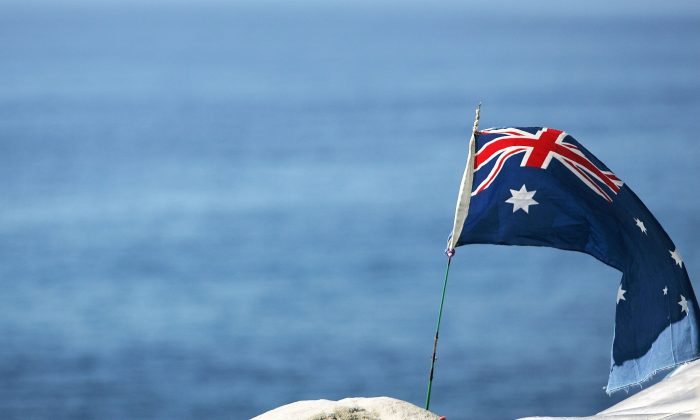 An Australian flag on the coast of Tasman Sea in Australia in this file photo. (Matt King/Getty Images)
Viewpoints

In his Australia Day 2021 message, Prime Minister Scott Morrison proclaimed that “We are a decent, fair, enterprising, and generous people who respond to whatever challenge is put before us. We are a people ‘one and free’ who look out for each other and our neighbours and are always striving to do better.”

This is undoubtedly an inspirational message which, however, has been revealed to be untrue in Australia in 2021.

Today, Dec. 17, as Australia is just a week away from Christmas, the decency and the fairness the prime minister spoke about have been suppressed, illegally and immorally, by the state government of Queensland.

As from today, the unvaccinated will no longer be able to visit clubs, restaurants, cafés, theatres, museums, and libraries. Even supermarkets will have the option to exclude unvaccinated customers.

These capricious orders have turned Queensland into an illiberal state, where some people are more equal than others. Such draconian and totalitarian measures have never been adopted in Australia before now.

Indeed, this day will go down in history as a day of infamy for four reasons.

First, these arbitrary rules involve the entrenchment of institutional discrimination against a minority of law-abiding citizens. They involve the distribution of burdens and benefits on the ground of vaccine status. It introduces a system of apartheid, a two-tier Australia.

Second, the obtuse rules mandating the discriminatory treatment of citizens based on their vaccine status are illegal because they effectively abrogate the right of individuals to consent to medical treatment, including vaccinations.

Lord Justice Mustill, an English judge, expounded on the dangers of violating a person’s right to consent to any form of medical treatment in Airdale National Health Service Trust v Bland (pdf):

“If the patient is capable of making a decision on whether to permit treatment and decides not to permit it, his choice must be obeyed, even if on any objective view it is contrary to his best interests. A doctor has no right to proceed in the face of objection, even it if is plain to all, including the patient, that adverse consequences and even death will or may ensue.”

The Nuremberg Code, relied upon during the Nazi doctors’ trials in 1947, also supports the right of an individual to refuse vaccinations. This ethics code has as its first principle the willingness and informed consent by the individual to receive medical treatment or to participate in a medical experiment.

Third, the discriminatory Queensland rules add to the cost of doing business. This is because the establishments, which the unvaccinated may not visit, must ensure that only vaccinated people be admitted to their premises.

Fourth, the rules are complex and forever changing. It becomes necessary to constantly check the Queensland Health website to ascertain whether it is possible to travel to this or that region of the State and, if so, what documents must be carried, or obtained to travel. The transitory nature of the health orders adversely affects the “rule of law” which requires stability.

Endless changes in government health orders or commands make it extremely hard, if not impossible, for anyone to plan their lives according to predictable legal standards.

The present episode of institutionalised discrimination, fuelled by numerous and predictably unpredictable health orders, reveal that Australian governments have learnt little from history.

This is not likely to change soon, considering that the mandarins of the school curriculum have seen to it that the teaching of history is neglected, thereby ensuring that children remain ignorant of their own and international history.

In my second novel, The Coincidence, I record a fictional discussion between the President of the United States and his Australian press secretary about the appalling ignorance among Americans of their nation’s history. However, the president’s views, are equally apposite in an Australian context.

The president bemoans people’s lack of familiarity with historical events:

How many of them would know which presidents have been assassinated while they were in office? Would they know anything at all about the War of Independence, Watergate, the floating of the American dollar, our contribution to the execution of the First and Second World Wars, Pearl Harbor, the Civil War, Monica Lewinsky, the two impeachment trials of President Trump, and even our exploration of space?

I am only mentioning American historical events. Once we discuss the history of the world, even greater ignorance would be exhibited.

Of course, I do not want to live in the past, but it is always important for the past to live in us.

It is a fair guess that most Australian politicians have never heard of the Roman historian Tacitus, who reportedly said that, “The more corrupt the state, the more numerous the laws.”

“It is the imprudent multiplication of laws which in some periods has thrown discredit upon the most noble of things, on liberty itself, and made men seek refuge in the most miserable and lowest of them, servitude.”

Perhaps, considering the interminable lockdowns, border closures, and a bewildering array of health orders in 2021, culminating in an egregious practice of discrimination, it will be appropriate for the prime minister to say in his Australia Day message for 2022: “Australians all let us rejoice, we were once young and free.”