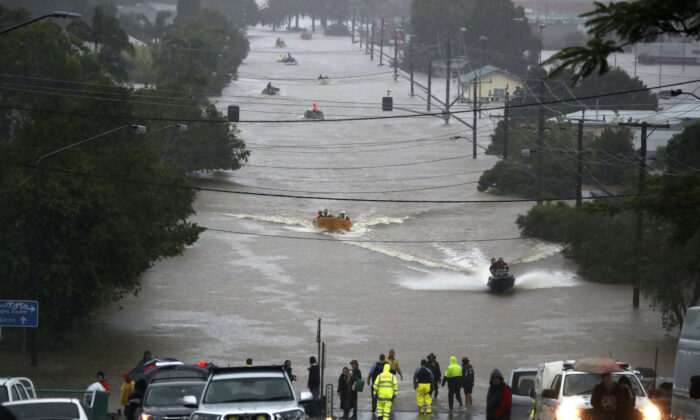 People use small boats to travel through flood water in Lismore, Australia, on Feb. 28, 2022. (Jason O'Brien/AAP Image via AP)
Australia

Residents in the northern New South Wales (NSW) town of Lismore have once again been asked to evacuate after flooding is forecast for the town through Tuesday.

NSW State Emergency Services (SES) issued the evacuation orders on Monday night for low lying parts of north and south Lismore, with 100 to 150 millimetres (4 to 6 inches) of rain on Tuesday potentially pushing the Wilson River to the height of its levee.

Lismore SES members, along with Australian Defence Force (ADF) troops, have been out on the streets of north and south Lismore, doorknocking residents who come under the evacuation order, as well as informimg east Lismore residents of the evacuation warning that is now in place for that area.

This comes just a month after the town and many other parts of northeast NSW and southeast Queensland were hit by the worst flooding in recorded history, with 22 lives lost across the two states, thousands of homes damaged or destroyed, tens of thousands of residents requiring temporary accommodation, and clean-up operations still in progess.

Bureau of Meteorology (BOM) meteorologist, Sarah Scully, said the cause of this current weather pattern is northeasterly winds bringing humid air down from the Coral Sea, which, combined with a lingering trough, is pushing into the coast between Noosa, Queensland, and Nambucca Heads, on the mid-north coast of NSW.

A severe weather warning is in place for this entire stretch of coast, with heavy to intense rainfall expected to deliver up to 200 millimetres (8 inches) in some areas, and already saturated ground and catchments likely to respond quickly, leading to riverine and flash flooding.

A  low pressure system forecast to form off the coast on Tuesday will drag the worst of the weather out of southeast Queensland, with the focus of the rainfall remaining on the north to mid-north NSW coast.

“Our greatest concern is through this region here,” Scully said. “We are expecting the potential moderate to major flooding, including across the Richmond, the Wilson, the Bellinger, and the Orara Rivers.”

Aside from Lismore, evacuation orders are also in place for Tumbulgum, near Murwillumbah, as the Tweed River rises, and low lying areas of Mullumbimby, with floodwater expected to pass 4.35 metres (14.3 feet) on the local gauge, after which roads will begin to close.

Residents in low lying areas of Kyogle, 90 kilometres (56 miles) inland from Byron Bay, have also been asked to evacuate as the Richmond River swells.

SES reminded Northern Rivers, north coast and mid-north coast residents who live near rivers, creeks, or catchments to stay up to date with the latest forecasts and warnings.