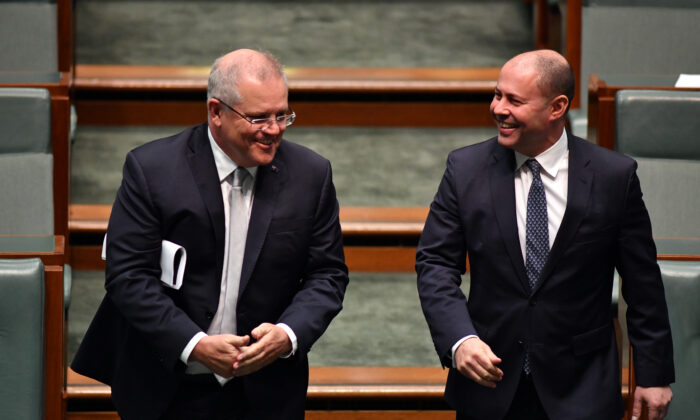 Prime Minister Scott Morrison and Treasurer Josh Frydenberg arrive in the House of Representatives at Parliament House in Canberra, Australia on May 13, 2020. (Sam Mooy/Getty Images)
Australia

The Morrison government is considering providing paid pandemic leave to workers in a bid to curb deadly COVID-19 outbreaks.

“Those discussions are continuing and when they are completed we will make some announcements,” the prime minister told reporters in Canberra on July 29.

The Australian Council of Trade Unions on March 11 called for two weeks’ paid leave for all permanent, casual and contract workers forced to self-isolate because of the pandemic.

There have been major concerns people with the virus attended work because they couldn’t afford the financial hit from staying home.

About 80 percent of Victoria’s new infections since May have been linked to workplace transmission.

The Fair Work Commission earlier in the week ruled all residential aged care workers including nurses were entitled to two weeks’ paid leave.

The Greens want to pass legislation giving employees access to special pandemic leave in the August sitting of parliament.

“It’s going to be essential to not only containing the spread in Victoria, but preventing further outbreaks in other states,” Bandt told AAP.

Porter said the government was “keeping a watching brief” on the issue.

“The system is working relatively well at the moment in terms of coping with that scenario where people have to be self-isolated for a period,” he told 6PR radio.