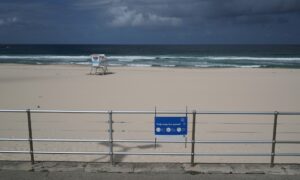 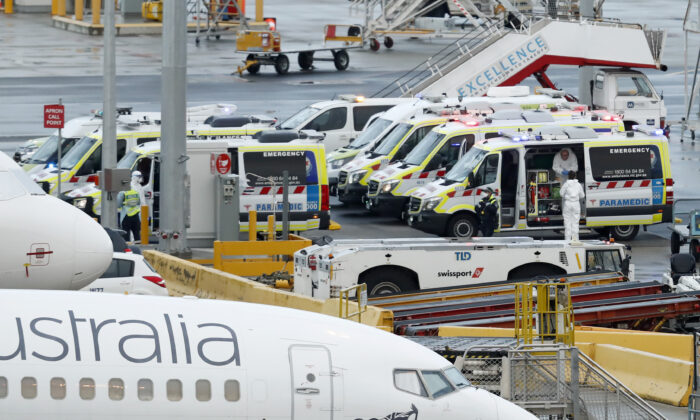 MELBOURNE, AUSTRALIA - APRIL 12: Ambulances are seen on the tarmac at Melbourne airport on April 12, 2020 in Melbourne, Australia. Over 1000 passengers arriving from Peru, Uruguay and India. (Photo by Darrian Traynor/Getty Images)
Australia

A flight from India has arrived in Melbourne and another from Cambodia landed in Sydney on April 13.

Australians flying in from Peru are expected to touch down in Brisbane on Tuesday.

Qantas is also due to mount rescue flights from Argentina and South Africa.

Details of those flights will be confirmed in the coming days, with information provided directly to registered travellers.

People planning to travel overseas when the crisis is over are being encouraged to holiday at home instead.

There is speculation international flights will not return until at least the end of this year, if not well into the next.

“It is impossible to tell at present precisely when travel restrictions will be removed because that will be a matter dependent upon the health advice at the time,” Tourism Minister Simon Birmingham told the ABC.

Senator Birmingham is wary of people going overseas and bringing the virus home, as well as potentially infected international visitors coming into Australia.

“The international travel restrictions have played a key role (in stopping COVID-19’s spread) and will continue to play a key role,” he said.

“The only people returning to Australia at present or entering the country are effectively those Australians receiving assistance through a range of different ways or undertaking their own flights to get back to Australia.

“They are going into strict 14 days’ quarantine.”

Senator Birmingham said the unfortunate reality was people would not be able to go overseas for some time, with no guarantee international flights will resume by December.

“There may be a slightly earlier point in time where it becomes feasible to think about domestic travel again,” he said.

“We’re not there yet but certainly this time is a good time for a bit of dreaming, planning, thinking about the Aussie break that you might take when we finally get to the other side of this.”