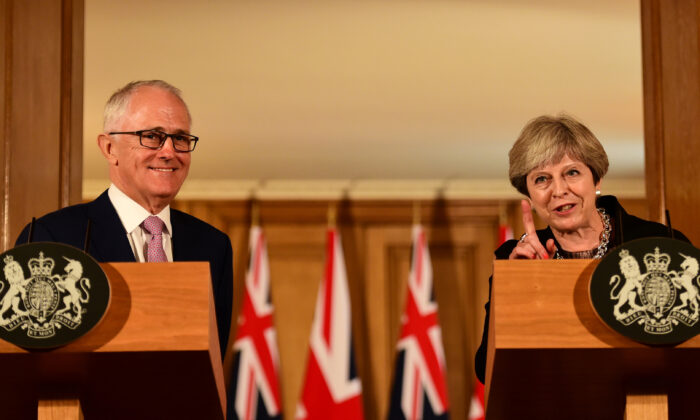 Australia's then Prime Minister Malcolm Turnbull and his British counterpart Theresa May speak at a press conference in 10 Downing Street in central London, on July 10, 2017. (Hannah Mckay/AFP via Getty Images)
UK

Australia’s trade relationship with the European Union is not something Britain should aim for, former Australian Prime Minister Malcolm Turnbull has warned.

In British discussions on Brexit, Australia and Canada have often been mentioned as two different models of trade relations with the EU.

An “Australian-style deal” or “Australian terms” is often used as a euphemism for no-deal Brexit, as Australia, unlike Canada, does not yet have a free trade agreement with the EU and has to trade with the 27-country bloc under World Trade Organisation (WTO) rules.

There is a way to go in the negotiations, but it is looking very, very likely that we will have to go for an Australia-style solution. pic.twitter.com/7fEXe1FJTF

UK Prime Minister Boris Johnson said on Thursday he believed the Australian terms “are very good terms” and Britain could still “prosper mightily” even if it exits the EU’s single market and customs union on Dec. 31 without a deal.

But Turnbull, who led Australia into free trade negotiations with the EU, said Britain will find out the so-called “Australian terms” are “pretty disappointing.”

“We have obviously a deal with the EU on WTO terms and there are really some very large barriers to Australian trade with Europe, which we are seeking to address as we negotiate a free trade agreement with Europe,” said Mr. Turnbull, who was prime minister of Australia from 2015 to 2018, on the BBC’s Question Time programme on Thursday evening.

“Australians would not regard our trade relationship with Europe as being a satisfactory one,” he said. “There are very big barriers to Australian exports of agriculture products in particular. You know there’s a lot of friction in the system in terms of services.”

“When I was prime minister, we started formal negotiations of a European-Australia free trade agreement but that will take some time.”

“So be careful what you wish for,” he warned. “Australia’s relationship with the EU is not one, from a trade point of view, that Britain would want, frankly.”