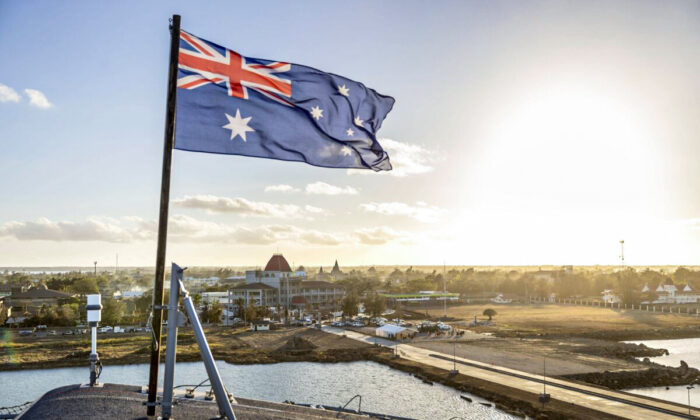 A supplied image shows the HMAS Adelaide approaching the port of Nuku'alofa in Tonga, Wednesday, Jan. 26, 2022. (AAP Image/Supplied by the Department of Defence, Robert Whitmore)
Australia

Australian Telco Finalises $1.6 Billion Buyout of Digicel to Keep It out of Chinese Hands

In October 2021, the previous Morrison government launched the bid to keep out potential Chinese suitors from gaining control over Digicel’s data network—the largest in the Pacific region.

“Telecommunications and digital access are critical to sustainable economic growth and development outcomes into the future,” she said in a statement.

“We are very pleased the deal has completed and we welcome Digicel Pacific to the Telstra family,” he said in an investor update.

Digicel Pacific is the largest mobile service provider to Vanuatu, Fiji, Samoa, Tonga, Nauru, and Papua New Guinea (just north of Australia)—it currently has around 1,700 employees, 2.8 million subscribers, and generates around US$466 million in service revenue.

The deal will see the Australian government provide a US$1.33 billion loan—via Export Finance Australia—to Telstra, who will top it up with another $270 million (AU$361 million). Telstra will own 100 percent of Digicel Pacific.

Rob Nicholls, associate professor of regulation and governance at the University of New South Wales, said the deal was purely a strategic play because it made little business sense for Telstra.

“There is no indication that the Australian government sought to put this opportunity out to tender. Part of the issue here is that the other two major Australian telcos are respectively Singapore-controlled (Optus) or controlled by a combination of the United Kingdom and Hong Kong interests (Vodafone),” he previously told The Epoch Times.

Geopolitical wrangling in the region has ramped up in recent months following the signing of a security deal between the Solomon Islands and the Chinese Communist Party, which could open the door for troops, weapons, and naval ships to be stationed in the region—just 1,700 kilometres from Australia’s northern city of Cairns.

Democratic governments have pushed hard to assert influence in the region to force Beijing out.

U.S. Vice President Kamala Harris announced on July 12 that the Biden administration would dispatch Peace Corps to the region, establish embassies in Kiribati and Tonga, appoint the first-ever U.S. Envoy to the Forum, and look at reestablishing a U.S. Agency for International Development Regional Mission for the Pacific to deal with natural disasters and humanitarian aid.