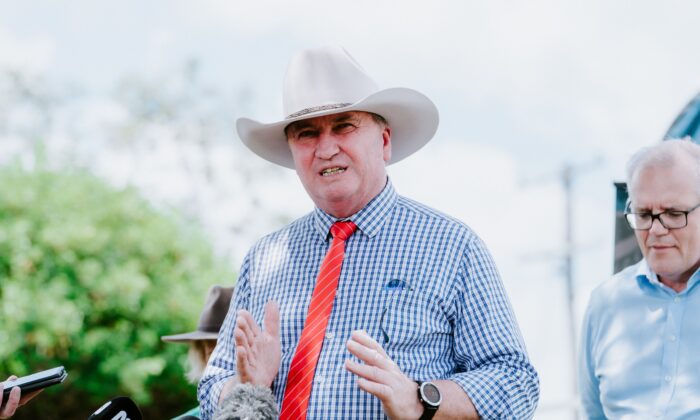 Deputy Prime Minister Barnaby Joyce speaks to the media during a visit to Rockhampton, in Queensland, Australia, on March 23, 2022. (AAP Image/Phat Nguyen)
Australia

Former Nationals party leader Barnaby Joyce has warned about the far-reaching consequences of the net-zero agenda, saying it could rewire the economy and drive up taxes.

The comment was made after newly elected Nationals leader David Littleproud, who came from the moderate faction, pushed for a generational change in the conservative party by making achieving net-zero by 2050 as one of his “first priorities.”

The 2022 federal election has seen significant swings against the major parties, which have been interpreted by some as a failure to attract inner-city voters, who instead went for “teal” independents and the Greens.

The defeat has fuelled growing calls for the Coalition to adopt progressive climate change policies in order to win back government.

However, Joyce pushed back the calls, arguing that under his leadership, the conservative National Party, which focuses on jobs and infrastructure, could retain all of its seats in the house. By contrast, he said the Liberals’ decision to campaign on a climate platform cost them 19 seats.

In a Facebook post on Wednesday, Joyce said voters want to know how policies promised in the election “affect the money they have in their wallet.”

“There is a cost to the 2050 emissions reduction target, and make no mistake that you are the ones who will pay for it,” he wrote.

Joyce noted that in order to reach the net-zero 2050 target, Australia would need to close its major exports such as coal, gas, live cattle and sheep, “but still expect to have the same money for health, education, the NDIS, roads, communication, the arts and defence.”

“Just as we cannot grow the same amount of food with less water if 450 gigalitres extra is handed to environmental flows in the Murray Darling Basin, as virtuous an idea that may be,” he said.

The former Nationals leader added that the ambitious climate goal would put new taxes on oil refineries, increase fertiliser prices, and drive up interest rates, despite the global energy and food supply crisis being exacerbated by the Ukraine-Russia war.

“Chinese military might be creeping closer to our nation’s shores, and that will put massive requirements of spending on our defence budget.”

According to research published by the Institute of Public Affairs (IPA) in April, at a minimum, the net-zero 2050 target would require the cancellation of all coal, gas and oil projects in the construction pipeline and lead to a loss of over 478,000 new jobs.