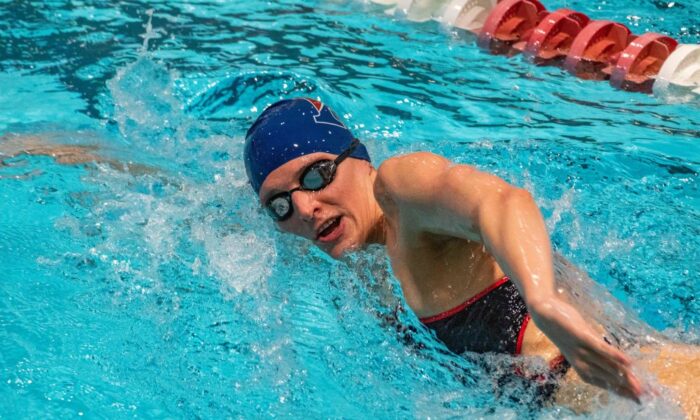 Lia Thomas, a transgender woman, swims for the University of Pennsylvania at an Ivy League swim meet against Harvard University in Cambridge, Massachusetts, on January 22, 2022. (Photo by Joseph Prezioso / AFP via Getty Images)
Australia

The swimming champion addressed the world swimming body FINA before it voted on Sunday to restrict transgender athletes from competing in women’s competitions. A majority of 71.5 percent of more than 190 members voted in favour of the new policy, which looks to create a separate category for transgender athletes.

Campbell joined former American swimmer Summer Sanders in speaking to the congress about the controversial issue that has marred the sports in the past months.

In her speech, the 30-year-old shared her personal story of moving to Australia from South Africa as a nine-year-old girl before highlighting the importance of inclusion and fairness as “the cornerstones of sport.”

Campbell noted that while these values usually “go hand in hand,” transgender athletes’ inclusion in women’s sport is “one of the few occasions where these two principles come into conflict.”

“The incongruity that inclusion and fairness cannot always work together is one of the reasons why it is so difficult to talk about this topic,” she said.

“Usually, they are terms of absolutes which work together, yet science now tells us that in this issue, they are incompatible.”

The swimming champion argued the fact that men and women are physiologically different “cannot be disputed.” However, removing the gender category distinction, she said, would be “to the detriment of female athletes” who have fought long and hard to be included and seen as equals in sport.

Campbell also told Congress that legislating trans athletes in elite women’s sports is not about winners and losers but about developing a policy that “accurately represents the science and draws a line to protect the fairness of the female category distinction in elite sports.”

“The creation of this policy did not stem from ‘feelings,’ what we ‘felt’ was the right thing to do. The policy was created with the inclusion of medical professionals, legal professionals, athletes, coaches and people from the transgender community.

“It is a policy that pays attention to inclusiveness but prioritises fairness.”

Under FINA’s new policy, male-to-female transgender athletes will only be eligible to compete in the women’s category if they have not experienced any part of male puberty before age 12 or beyond the onset of male puberty, which ranges from 9 to 14 years old in males.

According to the 24-page document, eligible trans athletes “are androgen-sensitive but had male puberty suppressed beginning at Tanner Stage 2 or before age 12, whichever is later, and they have since continuously maintained their testosterone levels in serum (or plasma) below 2.5 nmol/L.”

FINA also noted that athletes who do not meet the criteria for the men’s category or the women’s category may “compete in any open events that FINA may develop in the future.”

“FINA will begin work following the final promulgation of this Policy to determine the feasibility of establishing an open category in Aquatics sport disciplines, in which an athlete who meets the eligibility criteria for that event would be able to compete without regard to their sex, their legal gender, or their gender identity,” the document said.

All athletes must certify their chromosomal sex with their Member Federation in order to be eligible for FINA competitions, and failure to do so will render the athlete ineligible.