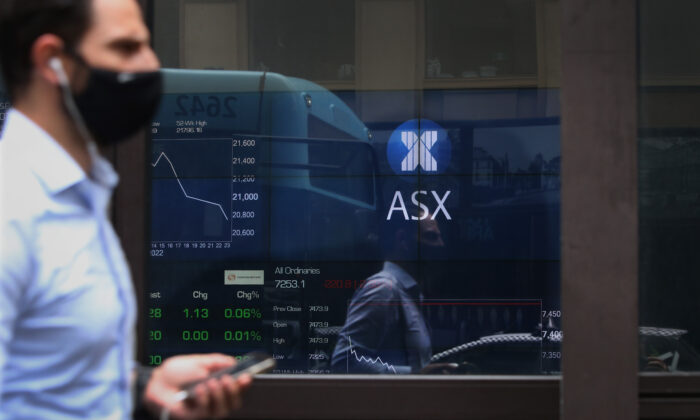 A pedestrian is reflected in the window of the Australian Securities Exchange in Sydney, Australia, on Feb. 25, 2022. (Lisa Maree Williams/Getty Images)
Australia

The Australian Securities Exchange (ASX) has plummeted to the lowest level since November 2020 as international markets fell due to intensified worries about the world economy.

“The backdrop for equities right now is about as bad as it gets,” City Index analyst Tony Sycamore wrote in his morning note.

“Central banks’ determination to break the back of spiralling inflation at the cost of growth likely guarantees a recession during the first half of 2023.”

Stock market performance in the week commencing June 13 was even worse than the prior week, which has made headlines as ASX’s worst week since October 2020.

It is noteworthy that almost all industries were down on June 17, with the technology sector dropping the most by 4.3 percent.

Commonwealth Bank of Australia saw its share prices drop 2.8 percent to $87.72, a 14-month low, and other major banks were also down by 1.5 to three percent.

At the same time, other popular names such as Woolworths, Goodman Group, Dexus, Seek, Breville and JB Hi-Fi plunged to 52-week lows.

A small number of well-performing shares on the Australian stock market on June 17 belonged to gold miners, with the share prices of Evolution and Northern Star going up by 4.4 percent and 3.4 percent, respectively.

Nevertheless, junior miner Dacian Gold’s stock price plummeted by a third to 11 cents following the announcement that it had suspended open-pit mining at its Mt Morgans goldmine in Western Australia due to ballooning cost pressures.