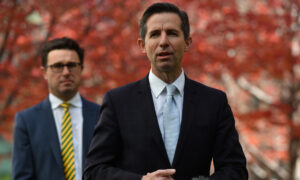 But the four states that struck deals with Labor before the election – New South Wales, Victoria, South Australia and Tasmania – insist that their six year funding agreements should be honoured.

Mr Pyne, at a press conference in Canberra on Nov 26, said the Gonski reforms would be discontinued after 2014 and that the existence of a $1.2 billion hole in the “school funding envelope” required the Government to bring forward its plans to introduce a new funding system.

In a pre-election economic statement, Labor returned $1.2 billion from the education budget to consolidated revenue after Western Australia, Queensland and Northern Territory failed to sign on to the reforms.

But the Abbott Government announced on Nov 27 that these non-participating states would now receive an extra $230 million in school funding for 2014.

One week prior to the election, Mr Pyne also stated that voters would “get exactly the same amount of funding for your school” under the Coalition as under Labor.

But on Nov 27, Prime Minister Tony Abbott refused to guarantee that no school would be worse off, only pledging that the overall funding amount would be the same as that promised under Labor. This opens the possibility that some schools will receive less funding under the Coalition’s scheme than under Labor’s.

The new model would be “flatter, simpler and fairer” to states and territories and reduce federal involvement in states’ responsibilities on education, Mr Pyne told reporters on Nov 26.

“We will make the model less prescriptive, less restrictive, with less control from Canberra in what is effectively state government and territory government schools.

“We don’t want to try and tell the states how to operate their own responsibilities. We’re not going to infantalise the states.”

“It was opaque, it was not transparent, it was confusing. It was, in fact, a beggar’s muddle,” she told ABC radio.

NSW Premier Barry O’Farrell strongly criticised the federal government over the move, saying they conducted themselves like a party in opposition.

“In all my years in politics I have worked out that it is best to have respectful discussions and consultation in private, not through the media,” Mr O’Farrell told reporters in Sydney on Nov 26.

“Secondly, when you move into government you have to stop behaving like an opposition.”

South Australian Premier Jay Weatherill said the Government should be penalised for turning away from the Gonski deals.

“We will be extracting a political penalty every day from now until Mr Pyne scraps his plans to back away from this agreement,” he said on Nov 27 in Canberra.

Australian Education Union federal president Angelo Gavrielatos said the states should use Nov 29’s meeting of the Ministerial Council for Education as an opportunity to ensure funding is not reduced.

“Education ministers must make clear on Friday that the Gonski agreements must be honoured in full, and the laws kept in place.”