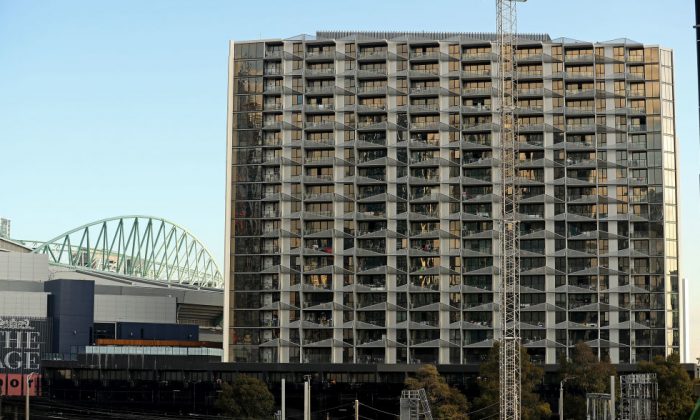 A general view of the Lacrosse building in the Docklands in Melbourne, Australia, on June 16, 2017. (Scott Barbour/Getty Images)
Australia

Canberra says it's not an ATM
By AAP

Victoria wants the federal government to pitch in $300 million to its newly-established fund for the removal of dangerous cladding from hundreds of buildings.

The Commonwealth is being asked to stump up $300 million to help remove dangerous cladding from hundreds of buildings across Victoria.

The state Labor government is establishing a $600 million fund, to be overseen by new body Cladding Safety Victoria, to fix about 500 buildings which are fitted with flammable material.

Premier Daniel Andrews said his government wants Canberra to foot half the cost and he has written to Prime Minister Scott Morrison asking for funding.

“There needs to be a true national partnership to put community safety first, to rectify these most dangerous buildings, to keep Victorians safe and not to put this in the too hard basket,” the premier told reporters on Tuesday.

Before the specifics of the Victoria’s plan were made public, federal Industry Minister Karen Andrews spoke positively of the move but indicated Canberra would not chip in.

“The Commonwealth is not an ATM for the states. So no, this problem is of the states’ making and they need to step up and fix the problem and dig into their own pockets,” she told ABC Radio National, while congratulating Victoria for coming up with a solution.

“I’ll be asking the Victorian minister to provide me with more details of (the plan).

“I intend to meet with him prior to (Thursday’s) Building Ministers’ Forum just to understand exactly what is being proposed and is being put on the table.”

Without Commonwealth support, Victoria plans to increase the building permit levy for high-rise construction over five years to cover the shortfall.

That would impact building works worth more than $800,000. Low-rise developments including townhouses would be exempt.

“We are being upfront about not putting forward a $600 million plan and only having funding for half of it. We’ve got both contingencies,” Andrews said.

The cladding remediation fund is one of 35 recommendations from a task force set up following London’s deadly Grenfell Tower inferno in 2017.

“It’s not an issue where there’s any easy fix. It’s going to take some time.”

Of the 500 Victorian sites identified as high risk, work will begin within weeks to fix the 15 most dangerous buildings.

Andrews declined to publicly identify the buildings to protect against risks such as arson.

He also flagged a broader crackdown to claw back money from construction companies which cut corners on building safety.

The construction industry says it fears it could collapse if issues around insurance premiums are not dealt with, urging state governments to enforce regulations.

Master Builders Australia chief Denita Wawn is urging states to ensure greater enforcement of regulations so that cowboys are held to account.

“As an industry association we can’t do that but those who regulate the industry can,” Wawn said.

Some states are excluding cladding from insurance policies in the wake of skyrocketing premiums.

“The insurers are taking on massive risk and are questioning whether or not they should do that,” Wawn said.

John Massey—the certifier of Perth’s Optus Stadium—has penned a letter to Scott Morrison warning his firm is in danger.

Massey says his firm’s contracts will be in trouble due to insurance companies offering private building certifiers coverage with exclusions for dangerous materials such as cladding.

“We will be required to close our business without our current insurance cover,” he told the prime minister.

“Building surveying firms across Australia have closed their doors and many more will be forced to follow.

“Without a workable solution on the table very soon, I believe the building and construction industry throughout Australia will eventually collapse.”

By Georgie Moore and Rebecca Gredley