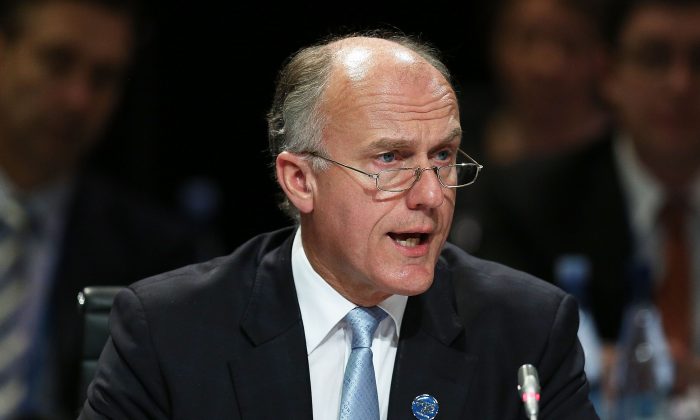 Australian Senator Eric Abetz has called on the Department of Foreign Affairs and Trade (DFAT) to respond to the verdict handed down by an independent China Tribunal that found beyond reasonable doubt that the Chinese regime is practicing forced organ harvesting on its own citizens.

Abetz, a Liberal who holds a senate seat for Tasmania, told ABC radio on Nov. 19 that he has been advised by DFAT that it is currently in the process of reviewing the China Tribunal’s final report and that he is looking forward to receiving the department’s response.

“Clearly, these issues are on the government’s radar and our foreign minister, Marise Payne, has a very good track record being concerned about all matters concerning human rights,” Abetz said.

The independent tribunal, which was chaired by Sir Geoffrey Nice QC, concluded that forced organ harvesting has certainly been committed against Falun Gong practitioners in China. Falun Gong, a spiritual discipline consisting of meditation exercises and moral teachings based on truthfulness, compassion, and tolerance, has been brutally persecuted by the Chinese regime for the past two decades. Adherents of the practice have been thrown into prisons, labor camps, and brainwashing centers where many have been tortured in an effort to force them to renounce their faith.

The tribunal’s findings also reported a “risk” that Uyghurs in Xinjiang could be subject to forced organ harvesting while detained inside the widely reported “re-education camps” set up by Chinese authorities.

Nice said the tribunal reached these conclusions after considering all the evidence available to it, including testimony from more than 50 witnesses given at two hearings. Nice previously led the prosecution of former Yugoslavian President Slobodan Milosevic at the International Criminal Tribunal. Joining him on the panel were six international experts in the areas of law, transplant surgery, international politics, Chinese history, and business. China was also invited to present evidence to the tribunal but it declined.

“I’ve no reason to doubt that the whole of the report is in fact true and correct,” Abetz said. “I believe that the Australian government, and the international community, needs to take a very strong stance and tell the Chinese authorities that what they are undertaking is illegal, it’s barbaric—it’s a breach of every fundamental human right that you can think of.”

According to the tribunal findings, a conservative estimate of 60,000 to 90,000 transplant operations are conducted in Chinese hospitals each year—vastly greater than the figures suggested by the Chinese regime of 10,000 to 20,000 per year.

Matthew Robertson, a doctoral student at the Australian National University (ANU), recently published in the peer-reviewed journal BMC Medical Ethics on Nov. 14 that “Beijing’s reported organ donation numbers don’t stack up and there is highly compelling evidence that they are being falsified.”

“It is difficult to imagine how this model could have been arrived at by mere chance, raising the distinct possibility that it was intended to deceive,” Robertson said in a press release. Robertson was formerly an editor at The Epoch Times.

Senator Abetz said that human rights abuses against Falun Gong practitioners in China is indicative of genocide and extends to other religious groups in China.

“[T]he simple fact is that the evidence is there—that the Falun Gong seems to be the main target, that Buddhists, Uyghurs, House Christians, and indeed criminals, have all been targeted for organ harvesting. It is a barbaric trade, it should be condemned,” he said.

The program was set up between DFAT, the Australian Human Rights Commission, and the Chinese Ministry of Foreign Affairs to advance human rights reform under the Communist party.

Hastie has spoken out against CCP influence in Australia and drew criticism in August from the Chinese regime when he compared the West’s response to China’s rise to France’s failure to contain the advance of Nazi Germany.

Paterson has spoken out about foreign influence risks at Australian universities and the escalating violence in Hong Kong. He said he will continue to do so.